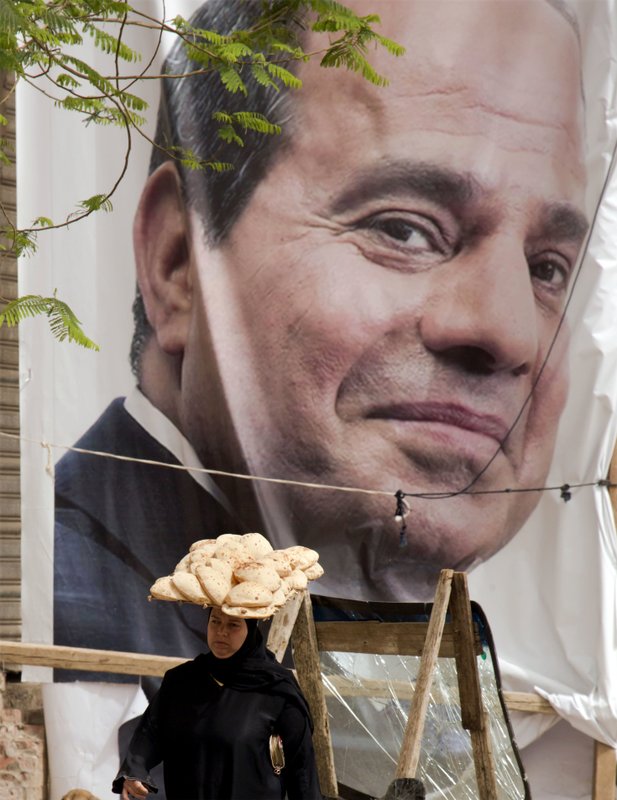 In Egypt’s election, turnout provides the only suspense

CAIRO (AP) — This week’s presidential election in Egypt is not about who wins — that was settled long ago — but about how many people bother to cast ballots.

Authorities hope that enough people will vote for President Abdel-Fattah el-Sissi to lend legitimacy to an election in which the only other candidate is an obscure politician who has made no effort to challenge him.

The streets of Cairo are lined with campaign banners and posters extolling el-Sissi, most put up by businessmen or organizations hoping to advertise their support. El-Sissi has done little in the way of traditional campaigning, and has not publicly mentioned his ostensive challenger, Moussa Mustafa Moussa.

A number of other presidential hopefuls stepped forward earlier this year, including some who might have attracted a sizable protest vote. But they were all either arrested or pressured to withdraw, making this the least competitive election since the 2011 uprising raised hopes of democratic change.

The government nevertheless hopes that sizable turnout among the country’s nearly 60 million eligible voters will lend legitimacy to the vote, and is giving Egyptians three days to cast their ballots, starting Monday.

“This election has a distinct populist dimension,” said Ziad Akl, a senior researcher at the Al-Ahram Center for Political and Strategic Studies. “The result of the election is already known, so a high turnout is the real prize here, which the regime will capitalize on.”

Instead of addressing any of the scores of rallies held by his supporters or appearing in TV ads, el-Sissi has opted for carefully scripted and televised functions. The former general has donned his military fatigues on recent occasions, highlighting the war on Islamic extremists and perhaps reminding voters that he led the military overthrow of a divisive Islamist president in the summer of 2013.

Many Egyptians welcomed the overthrow of Mohammed Morsi and the crackdown on his Muslim Brotherhood, and for a time el-Sissi enjoyed a wave of popular support bordering on hysteria, with downtown shops selling chocolates with his portrait on them.

But that aura has faded over the last four years, which could explain a clampdown ahead of the election on the media and critics.

The insurgency in the Sinai Peninsula, which gained strength after Morsi’s overthrow and is now led by the Islamic State group, has only grown more ferocious, with regular attacks on security forces and deadly church bombings. An assault on a mosque in November killed more than 300 people — the worst terror attack in Egypt’s modern history.

The government has meanwhile enacted a series of long-overdue economic reforms — including painful subsidy cuts and the floatation of the currency. That improved the investment climate and earned Egypt a $12 billion bailout loan from the International Monetary Fund. But the austerity measures sent prices soaring, exacting a heavy toll on ordinary Egyptians, especially the more than 25 percent living below the poverty line.

If there have been few public signs of discontent, it is likely because of a massive crackdown on dissent. Thousands of Islamists and several leading secular activists have been jailed, and unauthorized protests have been outlawed. The media is dominated by virulently pro-government commentators, independent journalists have been arrested or deported, and hundreds of websites have been blocked.

As a result, most of the local media coverage of the election has consisted of el-Sissi delivering televised speeches and attending official functions, with little mention of politics.

El-Sissi cultivates the image of a folksy populist, going on at length about his devotion to God, his reverence for his late mother, and his love for Egypt. In a one-hour TV interview that seemed more like an infomercial, el-Sissi said he wished he had one or two trillion dollars of his own money that he could spend on modernizing the country.

At a ceremony commemorating soldiers who fell in battle fighting Islamic militants, he appeared close to tears as he listened to the stories of widows and mothers. Two children who lost their fathers, and who were outfitted in military uniforms, sat on his lap. He was later photographed feeding them cake.

In the televised interview, el-Sissi insisted that the lack of candidates was “completely not my fault.”

“Really, I swear, I wish there were one or two or even 10 of the best people and you would get to choose whoever you want,” he said. “We are just not ready.”

Other presidential hopefuls had come forward.

But Ahmed Shafiq, a former air force general who narrowly lost the 2012 election to Morsi, withdrew after he was deported from his self-imposed exile in the United Arab Emirates, met by security men at the Cairo airport and whisked away to a hotel.

Former military Chief of Staff Sami Anan was detained by the military after announcing his intention to run. His chief aide, former chief auditor Hisham Genena, was beaten by unidentified men outside his home. He too was arrested weeks later, after saying he had documents incriminating Egypt’s “leadership” in unspecified violations.

Khaled Ali, a prominent human rights lawyer involved in the 2011 uprising, said he quit the race after authorities harassed and intimidated his supporters. Mohammed Anwar Sadat, a former lawmaker and the nephew of assassinated President Anwar Sadat, declined to run on similar grounds.

At a ceremony last week in honor of Mother’s Day, celebrated at the start of spring in Egypt, el-Sissi urged people to cast ballots, saying it would be a “great and respectable thing” even if they voted “no.” It was probably a slip of the tongue, but pointed to the reality of the election, which resembles the yes-or-no referendums held by Mubarak and other Arab autocrats going back decades.

“I need every woman, mother and sister, please. I won’t tell you it’s for my sake, but it’s for the sake of our country,” he said. “I need the whole world to see us on the streets.”