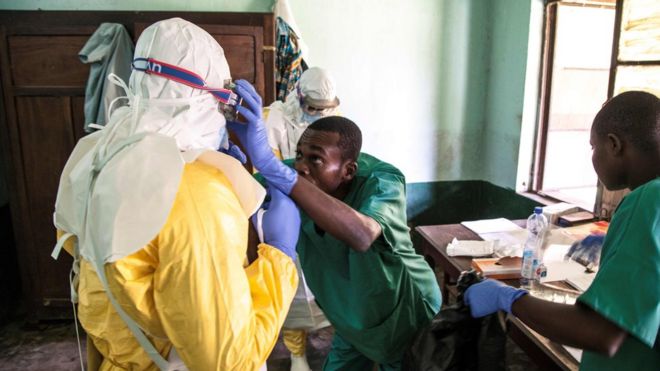 The Ebola outbreak in DR Congo has spread from the countryside into a city, prompting fears that the disease will be increasingly hard to control.

BBC – Health Minister Oly Ilunga Kalenga confirmed a case in Mbandaka, a city of a million people about 130km (80 miles) from the area where the first cases were confirmed earlier this month.

The city is a major transportation hub with routes to the capital Kinshasa.

Forty-four people have been infected and 23 people are known to have died.

Ebola is a serious infectious illness that causes internal bleeding and often proves fatal. It can spread rapidly through contact with small amounts of bodily fluid and its early flu-like symptoms are not always obvious.

Why is the spread to a city such a worry?

The 2014-16 West Africa outbreak, which killed 11,300 people, was particularly deadly because it spread to the capital cities of Guinea, Sierra Leone and Liberia.

Senior World Health Organization (WHO) official Peter Salama said the spread to Mbandaka meant there was the potential for an “explosive increase” in cases.

“This is a major development in the outbreak,” he told the BBC. “We have urban Ebola, which is a very different animal from rural Ebola. The potential for an explosive increase in cases is now there.”

Mr Salama, the WHO’s deputy director-general for emergency preparedness and response, said Mbandaka’s location on the Congo river, widely used for transportation, raised the prospect of Ebola spreading to surrounding countries such as Congo-Brazzaville and the Central African Republic as well as downstream to Kinshasa, a city of 10 million people.

“This puts a whole different lens on this outbreak and gives us increased urgency to move very quickly into Mbandaka to stop this new first sign of transmission,” he said.
Mapping the West Africa Ebola outbreak
What is being done to contain the outbreak?

So far only three of the 44 cases have been confirmed as Ebola and involve people who are still alive, the WHO says. There are a further 20 probable cases and 21 suspected cases, which together account for all the deaths.

The cases were recorded in three health zones of Congo’s Equateur province. 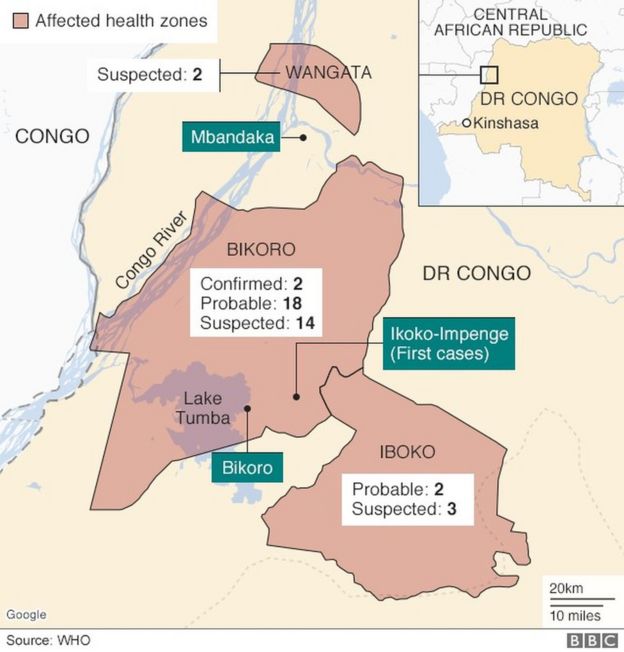 Isolation and rudimentary Ebola case management facilities had been set up in Mbandaka to cope with cases, Mr Salama said.

The disease may have been brought there, he said, by two or three people who had attended the funeral of an Ebola victim in Bikoro to the south of Mbandaka before travelling to the city.

On Wednesday more than 4,000 doses of an experimental vaccine sent by the WHO arrived in Kinshasa with another batch expected soon.

These would be given as a priority to people in Mbandaka who had been in contact with those suspected of carrying the Ebola virus before people in any other affected area, in order to stop Ebola spreading in the urban region and beyond, Mr Salama said.

The vaccine from pharmaceutical firm Merck is unlicensed but was effective in limited trials during the West Africa Ebola Outbreak. It needs to be stored at a temperature of between -60 and -80 C. Electricity supplies in Congo are unreliable.

Health workers had identified 430 people who may have had contact with the disease and were working to trace more than 4,000 contacts of Ebola patients, who had spread across north-west DR Congo, the WHO said.

Many of these people were in areas only reachable by motorbike, Mr Salama said.
A poor city with intermittent power

Mbandaka is a poor city on the banks of the River Congo.

Those of its residents who can afford to pay for electricity only get it for three to four hours a day, otherwise people use generators or solar panels.

The city has two hospitals, which have received money for renovations. But even they do not have a regular electricity supply and have to rely on generators.

For water, Mbandaka’s residents use wells or the river. Many people also use the river as a toilet, meaning there is a high risk of diseases spreading.

Passenger boats used to operate along the river to Kinshasa but these are no longer working. However, traders still use wooden canoes to reach the capital to buy and sell their goods – and this is how it is feared Ebola could spread.
What about travel restrictions?

The WHO said it was not recommending any trade or travel restrictions either within DR Congo, for example between Mbandaka and Kinshasa, or internationally.

“The good news is that the DR Congo population is very used to Ebola outbreaks,” he added.

“They know to protect themselves by avoiding mass gatherings and mass funerals. They know as well that traditional healers can amplify the outbreak.” 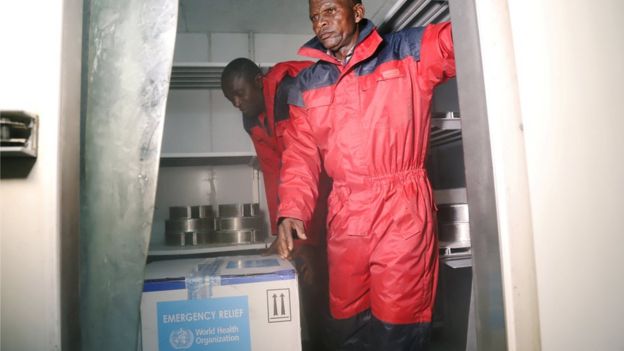 An experimental vaccine has arrived in the country

Observers described the international response so far as “remarkable and very rapid”.

“The logistic issues… will also be considerable on the ground to identify who should be vaccinated and to get out in this vast and very difficult area and provide vaccination in an appropriate way,” New York-based Ebola expert Dr Laurie Garrett told the BBC.

“It’s never been done before in the midst of an exploding outbreak so we’ll watch it very closely.”
Why does Ebola keep coming back?

There have been three outbreaks in DR Congo since the 2014-16 epidemic. Ebola is thought to be spread over long distances by fruit bats and is often transmitted to humans via contaminated bushmeat.

It can also be introduced into the human population through close contact with the blood, organs or other bodily fluids of infected animals. These can include chimpanzees, gorillas, monkeys, antelope and porcupines.

The disease is endemic to the area and it is not possible to eradicate all the animals who might be a host for Ebola. As long as humans come in contact with them, there is always a possibility that Ebola could return.

INDONESIA: Ancient art of healing from island of Bali – PICTURES