CHINA to be in charge of Uganda’s Internet, says control is crucial to stability 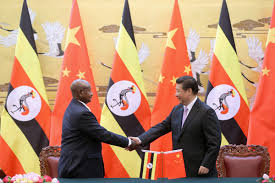 Under Xi’s rule China has increasingly tightened its grip on the internet, concerned about losing influence and control over a younger generation who are driving a diverse and vibrant online culture from livestreaming to blogs.

“Without web security there’s no national security, there’s no economic and social stability, and it’s difficult to ensure the interests of the broader masses,” Xinhua cited Xi as saying.

“We cannot let the internet become a platform for disseminating harmful information and stirring up trouble with rumors,” he added in comments made at a cyber security conference in Beijing, Xinhua said.

Chinese regulators have been driving a sweeping crackdown on media content, which has been gaining force since last year, spreading a chill among content makers and distributors.

China is also looking to take a leading role globally in internet regulation and technology more broadly, which has come into sharp focus amid a trade standoff with the United States and an arms race over technology.

The United States banned sales of parts and software to Chinese telecoms equipment maker ZTE earlier this week, which the Chinese firm said on Friday threatened its survival. ZTE uses U.S. chips in many of its smartphones.

The ZTE case had “triggered a heated debate” in China about advanced technology, Xinhua said in a separate report on Saturday, adding mastering high-end technologies such as chips was “key” to becoming a strong nation.

Luo Wen, China’s deputy industry minister, said while China had made progress in advance manufacturing in areas like electric vehicles and aviation, it was still facing challenges due to a lack of top talent and global scale, Xinhua said.

“Our advanced manufacturing development faces the risk of being boxed in at the low-end,” Xinhua reported, citing Luo. —— AUTO – GENERATED; Published (Halifax Canada Time AST) on: April 21, 2018 at 08:09AM

UGANDA: Regime trying to explain itself out of human trafficking from Israel – VIDEO

US GUNS: Another school shooting on Columbine massacre anniversary