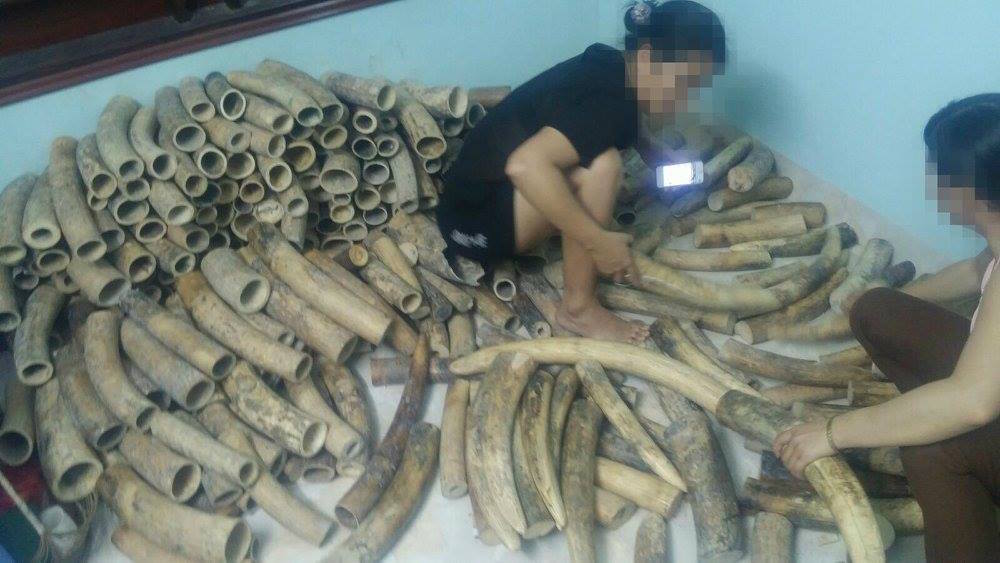 480kg of ivory for sale in Vietnam – File photo WJC
IBTIMES – China, the world’s largest consumer of ivory, has now imposed a blanket ban on the sale of elephant ivory and its products from 31 December to make good on its earlier promise towards protecting the lives of endangered animals.

In what has been hailed as a major push towards combatting the poaching of African elephants, the ban comes into effect in the largest ivory market in the world. “The Chinese authorities will continue to clamp down on [the] ivory collection as well as processing, sales, transportation and smuggling of elephant tusks,” said China’s State Forestry Administration.

China, where items such as chopsticks made of ivory hold an iconic status among the elite, is thought to be majorly responsible for nearly 30,000 African elephants being slaughtered every year by poachers.

In order save African elephants, China had announced that it would implement a total ban of ivory in late 2016.

Earlier, in 2015, Chinese President Xi Jinping and then US President Barack Obama signed a landmark deal, agreeing on a “near-complete” ban on ivory products. While the prohibition in the US came into effect in June 2016, China is enforcing the ban from the last day of 2017, with dozens of businesses engaged in the ivory trade shut down.

“From today… the buying and selling of elephant ivory and goods by any market, shop or vendor is against the law,” the forestry ministry said in a statement via its social media account. “From now on, if a merchant tells you ‘this is a state-approved ivory dealer’… he is duping you and knowingly violating the law.”

There are also concerns that China’s latest crackdown, though widely welcomed, might push the illegal ivory trade to other parts of Asia, such as Hong Kong and Laos. Reducing the demand for products made of ivory is the only effective way to push ahead with conservation measures, say wildlife experts.