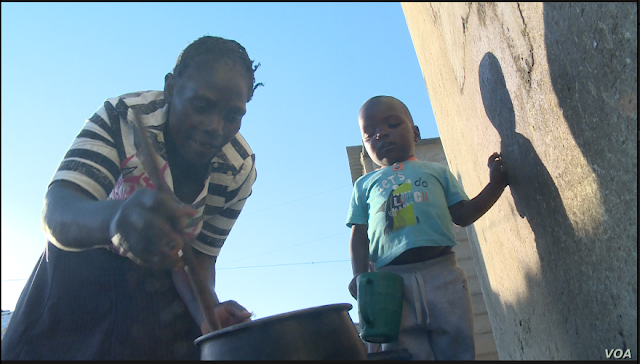 HARARE (VOA News) – Zimbabwe’s food situation is moving from a crisis to an emergency because of El Nino-induced drought and the ongoing economic meltdown, the United Nations said.

Plaxedes Chibura of Epworth, located about 60 kilometers (37 miles) southeast of Harare, is in desperate need of food aid.

“We have resorted to just one meal a day,” said Chibura, 48, who struggles to care for her grandchildren. “At times, it’s just the vegetables we get in our garden. We are struggling to get money to buy food. I wish donors would bring us food, especially for the children, as I am not employed. Even school fees I can’t pay. One of them [the children] was not well, so medical bills.”

Bishow Parajuli, the coordinator of U.N. agencies in Zimbabwe, is urging farmers to invest in irrigation and small grains as part of efforts to reduce the effects of climate.

The world body says Zimbabwe is among several southern African nations hit by extreme weather in the 2018-19 growing season.

The drought has devastated crops — especially corn, which is used to make the staple food sadza, a thick porridge that is served with relish. In addition, Cyclone Idai in March destroyed many crops a few weeks before harvest time.

“Unfortunately, we are moving from a crisis to an emergency, which is pretty serious,” Parajuli said. “Also the economic challenges facing the country, people have lost their income. The situation is really precarious.”

The drought has also affected the water supply. Michael Chideme, the spokesman for Harare, says two of the capital’s reservoirs have dried out and others are following suit. Water rationing has begun.

Zimbabwe’s hopes now depend on “the generosity of the international community,” Parajuli said.