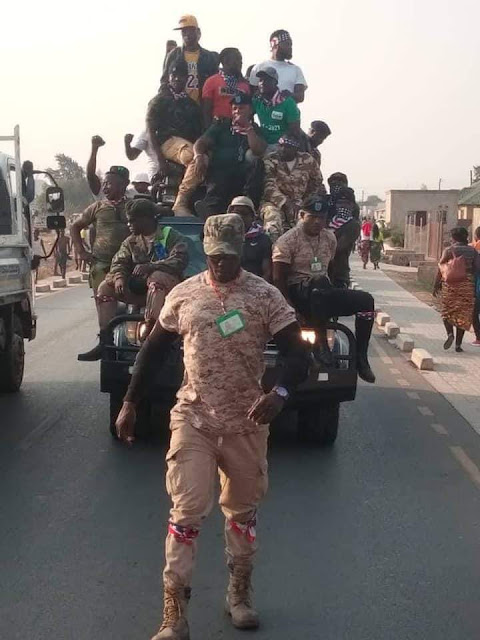 There are clear signs that the Zambian government is preparing to fight a war(going by it’s large scale armament of the domestic security units and party cadres). Without an internal threat, one can rightly connect the dots in the establishment’s consistent narrative at all levels to retain power at all costs.

The imminent defeat in in the upcoming Elections in view of the  failed Economy is driving the PF government of Edgar Chagwa Lungu into terrorism campaign frenzy in order to retain power using the military option. Massive military displays have been staged publicly backed by calculated authoritative threats from senior government officials.

Zambia faces no external threats from its neighbours in the SADC Region and beyond. The procurement of heavy military armaments for the Armed Forces and the militarization of the civil Police is therefore a source of great concern to the general public, the opposition parties, activists and civil society in Zambia.

Irrefutable evidence of infiltration and enlistment of political adherents within the Police ranks is documented.The dilution of professionalism with caderism is a definite recipe for anarchy and blood bath within the foreseeable run up to the 2021 General Elections.

The government’s apparent willingness to showcase these weapons on fancy military parades appears to be a statement, of a show of force and that it intends to use them on its civilian populations. This undoubtedly result in an escalation of human rights violations and suppression of independent voices and more attacks and closures of private and independent media organisations.

Home Affairs Minister Steven Kampyongo and Inspector General of Police Kakoma Kanganja have on several occasions publicly issued threats to deal with what they term as ‘trouble makers’ ahead of the 2021 elections. They said this when they commissioned and showcased a large fleet of armoured vehicles at a police parade in Lusaka recently.

When he met a group of pastors at State House shortly afterwards, President Edgar Lungu urged them to pray for the loser of the 2021 elections so that he doesn’t deal with him. With this kind of statement and with a display of military weapons that have been deployed to the civil Police, it appears President Edgar Lungu has already determined the outcome of the 2021 election and is unwilling to allow the democratic process determine the outcome.

These can neither be isolated nor spontaneous statements. They are extract statement from a well documented scheme to retain power against the will of the people.

On several occasions, he has vowed never to hand over power to anyone even if loses the election. President Lungu has threatened to arrest Hichilema on an alleged privatisation of government owned companies and properties that took place more than 25 years, under an Act of parliament. The privatisation exercise was superintendented by Zambia’s international lenders and cooperating partners IMF, the World Bank and the Paris Club while Hichilema was a consultant hired by a financial firm Coopers and Lybrand.

The superfluous and unproven accusation began to surface when he expressed ambitions to seek the office of the Zambian presidency. Hichilema was not invited in his personal capacity but as an evaluator like hundreds of others experts. Remarkably President Lungu, a lawyer was equally hired in exactly the same capacity as a consultant in the privatisation process

The Patriotic Front ( PF) government has continued shutting down private media houses and terrorising individual journalists that have been exposing their corruption, violence and theft of public resources. One of the TV station they successfully shut down is the prime TV largely that had a viewership of millions of citizens. The PF government under President Edgar Lungu has also shut down the biggest print media newspaper ‘The Post’ for its critical reporting and exposing these schemes. All these efforts are aimed at stifling divergence and suffocating the democratic air passage.

The judiciary in Zambia as well as the Zambia Police and the Electoral Commission of Zambia (ECZ) have been compromised and no longer operate within the confines of the constitution of Zambia but in the interest of the ruling party. The separation of powers between the three arms of government have been hijacked by President Edgar Lungu. At a rally in North Western Zambia, Lungu warned to deal with any judge that would rule in the way of the Kenyan courts that nullified the presidential elections and declared that Zambia was not Kenya. Subsequent judgement have been publicly questioned as not being meritorious following such statements from the head of state.

The compromise of  key public institutions has a potential of bringing trouble in the country if the international community fails to send a signal of disapproval to the Zambian authorities.  There is still a rare but fast closing window of opportunity for the  International Community to decisively stop another bloody stain on the face of Africa.

The PF government under Mr Edgar Lungu have persistently been inciting and sponsoring ethnic hate with intention to cause certain tribes rise against each other. Selective Victimization and premature retiring of civil servants from certain tribes is public evidence for anyone to see. The people behind these acts of violence which we believe has the potential to cause bloodshed in the nation and further increase human rights violations include,

The Patriotic Front ( PF) government have armed their political cadres with an assortment of military grade automatic weapons including uniforms. This has exposed opposition leaders and members of the public to great risk. These political cadres have been unleashed  on PF’s political opponents and other critical voices but are not arrested when they carry out these attacks.

The Electoral Commission of Zambia has come up with a mechanism to desefranchise voters from opposition strong holds under instructions by the PF government. This matter has the potential to cause chaos if not properly handled by government.

It is therefore,  in the interest of the Zambian citizenry that as an Activist for good governance and Human rights,  I call upon the international community to intervene in this case, in order to protect civilians and opposition leaders whose lives are under serious threat. We further call for the immediate suspension of any financial aid to the government of Zambia for undermining democracy, good governance,human rights and high levels of corruption which has greatly affected millions of Zambians.

If the International community continues to bankroll the Zambian government through debt forgiveness and other funding, all these will be channelled into activities that undermine democracy and the rule of law. The resources will be used by government to fund ruling party political militias that may result in genocide in the not too distant future.

Zambia has collapsed below the democratic and governance benchmarks.

Your quick response to this emergency will be highly appreciated.

===
The AUTHOR, Sikaile C.Sikaile, is a human rights and good governance activist for Zambia.
Contact : Sikailesikaile2030@gmail.com