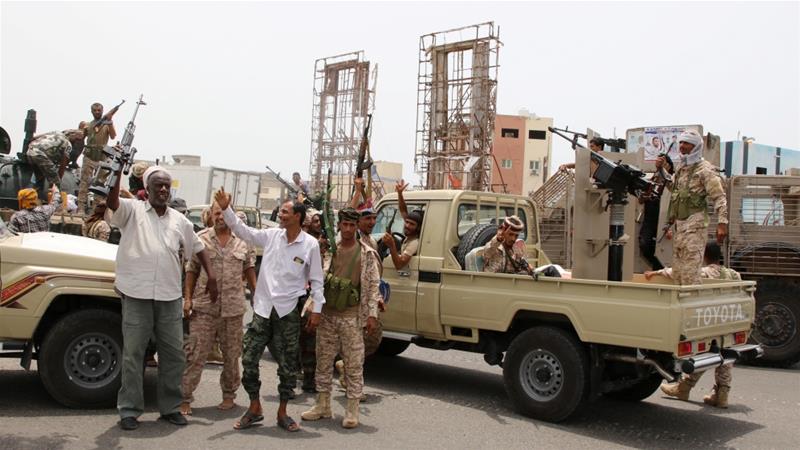 Separatists in southern Yemen have seized all government military camps and a presidential palace in the port city of Aden, according to security sources and witnesses, amid heavy fighting that has killed and wounded scores of people.

A spokesman for the Security Belt, a militia aligned with the United Arab Emirates-backed Southern Transitional Council, told AFP news agency on Saturday that fighters from the group met no resistance when they seized the all-but empty presidential palace from forces loyal to President Abd-Rabbu Mansour Hadi’s government.

The announcement came hours after a government official and local sources said the separatists had also wrested control of all government military camps in Aden, the city temporarily hosting Hadi’s government, after clashes that killed dozens.

“We took the Maashiq palace from presidential [guard] forces without a fight,” a spokesman from the separatist-dominated Security Belt force told AFP.

Witnesses confirmed the move to AFP and Reuters.

The moves put the separatists in effective control of Aden, and Hadi’s government accused the STC of staging a coup.

“What is happening in the temporary [government] capital of Aden by the Southern Transitional Council is a coup against institutions of the internationally recognised government,” the foreign ministry said in a Twitter post.

Hadi, who was swept from power in 2014 when Houthi rebels overran Yemen’s capital, Sanaa, is currently based in Saudi Arabia‘s capital, Riyadh.

The combatants in Aden are nominal allies in the Saudi-led coalition that has been battling the Houthis in northern and western Yemen since March 2015, but they have rival agendas for the country’s future.

There was no comment from the coalition.
‘Every inch of Aden’

Nasser Arrabyee, a Yemeni journalist based in Sanaa, told Al Jazeera the separatists have declared they were now in control of “every inch of Aden”.

“This is unprecedented – it was not expected to happen this quickly,” he said, adding the move could see the south secede from the north.

Doctors Without Borders (MSF), in a statement on Saturday, said the city was “in a state of war” and has ground to a halt because of the fighting.

The humanitarian group said it has treated 119 people in less than 24 hours.

“Most of the wounded are civilians trapped by the fighting and probably victims of mortar fire or stray bullets. Yesterday we treated a woman who had a bullet wound and she was eight months pregnant. At least five people were dead on arrival at the hospital, one of them a child,” said Caroline Seguin, MSF’s head of programmes in Yemen.

“The city’s a battlefield. We can hear the sound of heavy weapon fire and tanks are moving around the streets,” she added.

In addition to Fourth Brigade, the separatists also seized the Tarek military camp.

“It is all over, the [Southern Transitional Council] forces are in control of all the military camps,” an official in Hadi’s government told Reuters.

The fighters also took over the house of Interior Minister Ahmed al-Mayssari after he was evacuated with the help of coalition forces, government officials told Reuters.

The violence in Aden highlights a rift within the alliance and threatens to open a new front in Yemen’s five year-war, which has killed tens of thousands of people and pushed the impoverished country to the brink of famine.

The clashes between the two groups began on Wednesday when forces loyal to the STC attempted to break into the presidential palace in Aden after a call from ex-cabinet minister Hani Bin Braik, who serves as the council’s deputy head, to “topple” Hadi’s government.
‘Inclusive dialogue’

It was the recent withdrawal of UAE forces from Aden that “encouraged [separatists] to take over the city”, Al Jazeera’s Mohammed al-Attab said, referring to Abu Dhabi’s decision in July to pull out thousands of troops from Yemen.

Reporting from Sanaa, al-Attab said a Houthi-claimed attack on a military parade that killed 36 people, including a senior Security Belt commander, earlier this month had also inflamed tensions between the separatists and the government forces.

The separatists had accused an Islamist party allied to Hadi of complicity in the attack.

“The Security Belt viewed the attack on the military parade with suspicion as they feel there are many parties involved seeking to destroy and weaken their forces,” our correspondent said.

“Today, they have achieved many of their goals by taking over all of the camps,” he added. “This is another failure for the Saudi-led coalition.”

Earlier on Saturday, both the United Nations and the UAE called for calm in the port city.

Antonio Guterres, the UN secretary-general, called for an end to hostilities in Aden and urged all sides to “engage in an inclusive dialogue to resolve their differences”.

Abdullah bin Zayed Al-Nahyan, UAE’s foreign minister, said Abu Dhabi was “exerting all efforts to calm and de-escalate the situation in Aden”, saying the two camps should focus their efforts on fighting the Houthis not each other.

The Houthis control Sanaa, Hodeidah and other major urban centres while Hadi’s government holds Aden and a string of western coastal towns.

Sheikh Abdulla also called on the UNs envoy to Yemen, Martin Griffiths, “to make all possible efforts to end the escalation in Aden”, the official Emirati news agency WAM reported.