XENOPHOBIA: Could South Africa be dealing with symptoms of unfinished revolution? 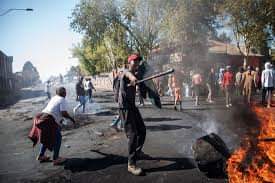 ON THE XENOPHOBIC ATTACKS IN SOUTH AFRICA

My favorite cab driver in Pretoria is called Vusi. He once lived in Tanzania, training as a MK fighter. (He speaks Kiswahili fairly well). We chat a lot. About life. About politics.  One day he told me that there was no system too strong (not) to be defeated. Pulling out a match box from his glove kit, the held it up and said: “we finally defeated apartheid with just this. We tried the gun and bombs but with limited success. Until we started burning down their property. That’s when it really began to hurt”.

But that is not the most startling statement he ever made. He told me that most of the “real anti-apartheid fighters, are disappointed that the white man still owns 95 percent of the economy, thanks to Mandela. But we cannot go against Madiba you see. We are just waiting for him to die then we sort this whole mess out”.

I have never stopped thinking about Vusi’s words. And each day that goes by, his words make more tragic sense to me.

We must stand with the Africans being lynched by fellow African in South Africa, as we reflect on Vusi’s words.

Could we be dealing with symptoms of an unfinished revolution?

« XENOPHOBIA: Could South Africa be dealing with symptoms of unfinished revolution? (Previous News)
(Next News) :JEFFREY EPSTEIN: Hundreds of other people could be implicated in court documents »