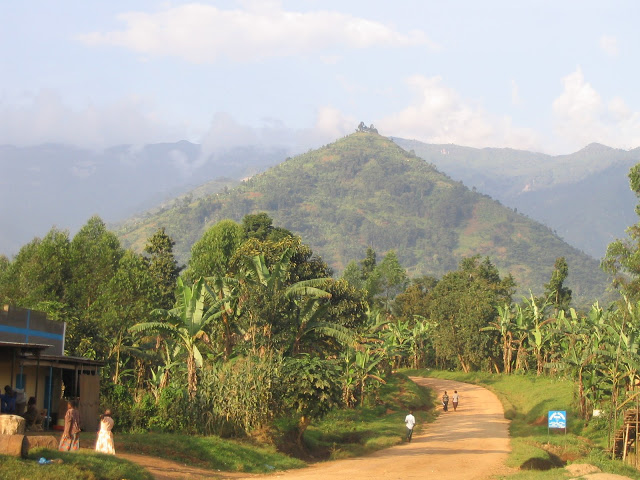 On this side of our world, nothing is held in high accord more than superstition. From what we have seen and heard, it is not uncommon to hear of people meeting ghosts and making huge sacrifices to appease the ancestors. Strange things happened after Wakauna’s wife died. Of the 3 children that she left was her 5 months old baby who was named Wakwabubi. Many have testified to have been told of people who found her breast feeding the child several times.

Tuesday
One time, the child is said to have been placed on his father’s mat but he was found well laid in the basin which in this part of the world would qualify for a baby’s cot. We rarely have the luxury of beds, so to keep the baby comfortable, we carefully lay old clothes (bitsina) in the basin and place in there the baby, it is as comfortable and even more than any cot.

So the baby in the old baby-show had been placed in Wakauna’s bedding (which was a mat). To everyone’s surprise they found the baby in the improvised “cot”. No doubt this was the work of its late mother everyone said without asking where Musuya had gone after sweeping the house.

It is also widely said of many times when she had returned to her husband’s side only to find another woman. Did I tell you that after inherited and remarried Wamono’s widow. Whenever the ghost found Wakauna’s new wife on the body, it never went well with her as she would assault the woman who had taken her place; and for that reason, we had to make sacrifices and other cultural proceedings to arrest her ghost and restrain it from troubling the people (a day has been decided when in detail the writer will narrate all the rituals performed to arrest the ghost of Umuganda.

Before the ceremony to arrest the ghost of maayi Umuganda she had allegedly found her former husband sharing their bed with Wamono’s widow, the ghost carried the couple out of the house only for them to awake among the goats and sheep. This happened after Wakameli’s circumcision when Walyaula treated us to a lot of the local beer and kwete. Anyway on that particular night not many people made it back home and todate we never know whether it was the ghost which carried this couple to the kraal or they also actually did not reach home after the heavy drinking.

But everyone will take the other version, everything is held in awe and mysteries such as that to keep the community within the realms of superstition.

In fact when Wakwabubi (Wakwabubi was the 5 months old left behind by mother when she passed on) was growing up and especially when he became of age, no one could punish to discipline him like they did with other children, he always had his way around. It is said that he had the spirit of his mother upon him and thus was accorded special care. It is for this reason that Wakwabubi did not last long in school. He now takes care of Wetonyi’s animals farm and helps with roasting tsimuma around the village. In fact, when any animal suspiciously dies in the area, it is Wakwabubi who is always brave enough to taste and prove whether it died of poisoning or not. When 2 hours elapse since he ate the meat, then it is good and we can also eat. Of course on this side we never throw away meat when an animal dies.

Sometimes we dry by hanging it in the kitchen (khunungo). The soot and smoke in the kitchen preserves the meat and left there can even stay years without going bad. On a rainy day when such meat is cooked with ground nuts and served, one can eat and even bite their fingers. We call it ukhwisamuna when one eats and continues leaking their lips. And normally served with bushasha then you find Seperia saying that wakuulisa kumumilo paka kwola i Manafwa!

Till then we shall keep you posted!

Did you find apk for android? You can find new Free Android Games and apps.
Sharing is caring:
UGANDA, Entertainment Uganda, Entertainment Comments Off on X-Filesfrom the village – Season II Print this News