RT – A sublime brace from Edinson Cavani was enough to sink Portugal in a pulsating last 16 clash in Sochi and dash Cristiano Ronaldo’s dreams of clinching an elusive World Cup.

The Uruguay frontman’s early opener was a goal good enough to win any game. A move he started with an exceptional 40-yard cross-field pass to strike partner Luis Suarez, he finished with an equally impressive dive to meet Suarez’s return at the far post.

The forwards’ eventual winner was another stunning strike, opening up his body to curl a right-footed strike past Rui Patricio to finish a counter attack that began from his own area, to cancel out a Pepe equalizer. 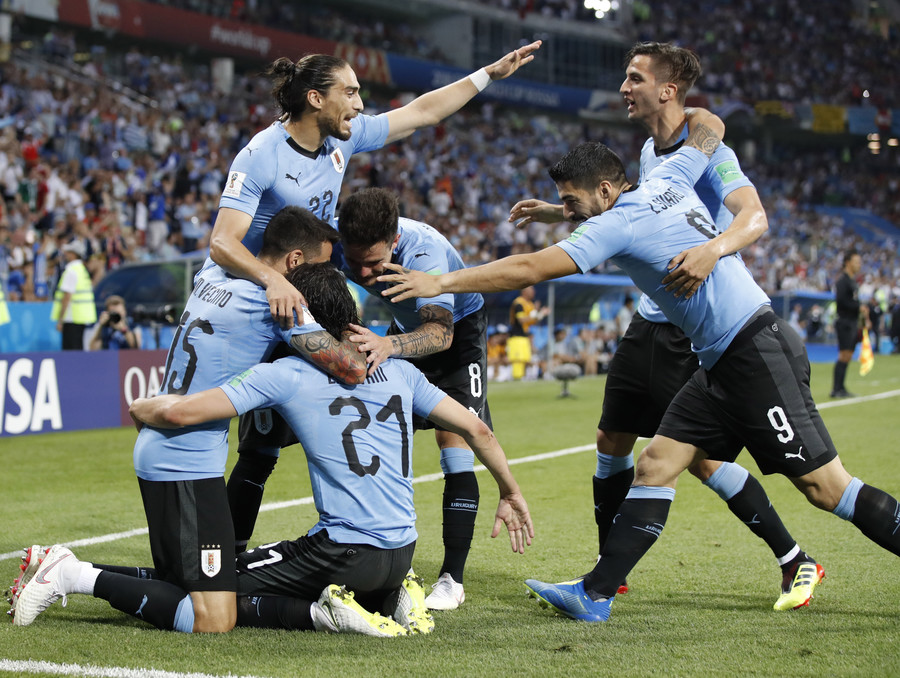 As temperatures simmered to a relatively balmy 25C in south Russia, the atmosphere in a humid Fisht Stadium set the stage for a mouthwatering last 16 clash on the Black Sea coast between two of the competition’s dark horses.

The game was billed as something of a meeting of world stars with the proposition of a duel between Cristiano Ronaldo and Luis Suarez. It was Ronaldo who became the first to test the opposition goalkeeper, forcing Fernando Muslera into action with a shot from 20 yards, but it was straight down the windpipe of the Uruguayan keeper, who swooped to gather comfortably.

However, it was neither of those two players who opened the scoring. Cavani, so used to playing a supporting role at PSG to Neymar and on the international stage to Suarez, grabbed the central role on perhaps his finest night for his country.
Read more 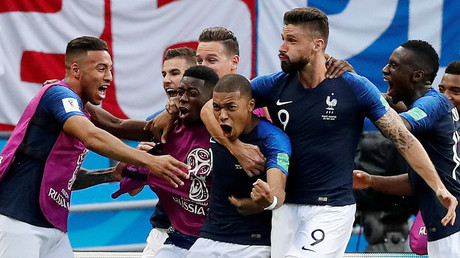 His first was a move he started deep on the right flank, pinging a 40 yard cross-field pass for Suarez, who chested down before maneuvering space to fire in a cross to the far post to strike partner Cavani to rise magnificently and guide the ball from between his shoulder and neck into the back of the net.

Ronaldo was perhaps guilty of taking too much on himself, neglecting his supporting cast not in an attempt to grab the limelight, but rather the game by the scruff of the neck. His urgency went unrewarded however, and Suarez came close to doubling the Uruguayan lead on 22 minutes, when he hit very low free kick under the wall, which Rui Patricio did well to get a hand to low down to his left-hand side

Portugal seemed to run out of ideas even in the first half, firing long balls into the area, none of which found any of their intended targets. Even a show of Ronaldo’s thighs could not trigger a repeat of a free-kick goal he scored in the same stadium against Spain in the very first game.

Uruguay entered the game as the only team in the tournament not to have conceded, and parked the metaphorical bus after their early goal, and ensured they went into the break 1-0 ahead.

Not long after the restart, Portugal found their breakthrough when Cavani’s earlier leap was mimicked by Pepe in the 55th minute when he rose unmarked to meet a cross into the box and power a header past a rooted Muslera. 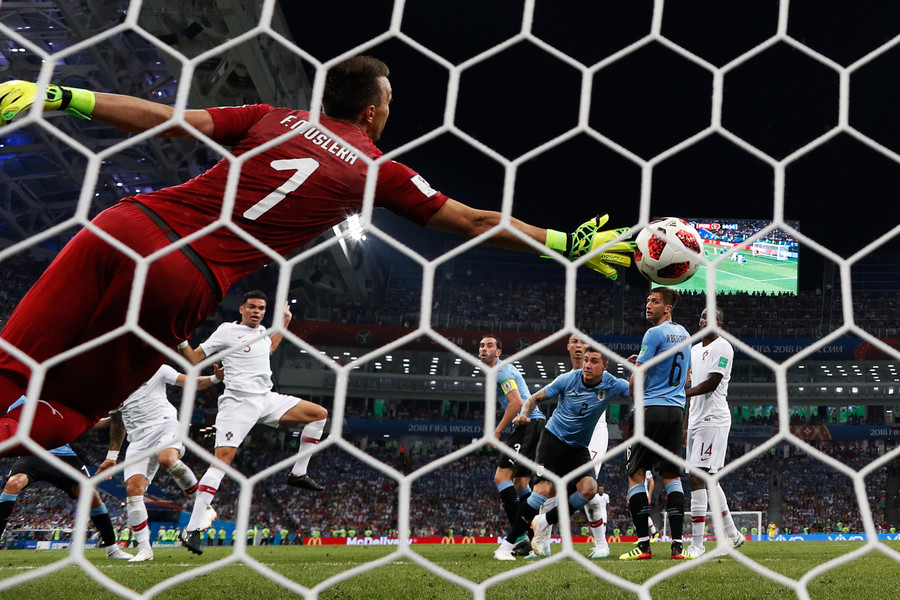 The goal opened up Uruguay who, notoriously cagey throughout the tournament, pressed forward, sensing that a Portugal defense that had leaked five goals in four games could crack again.

Luis Suarez was in the midst of several physical battles in midfield, although most of the action that sent the Barcelona forward sprawling appeared superficial.

If Uruguay parked the bus after their equalizer, their second goal resembled more of a runaway train; from a counter attack that began in their own box, the ball found Rodrigo Bentancur who played a beautiful ball to an onrushing Cavani on the left-hand corner of the area. 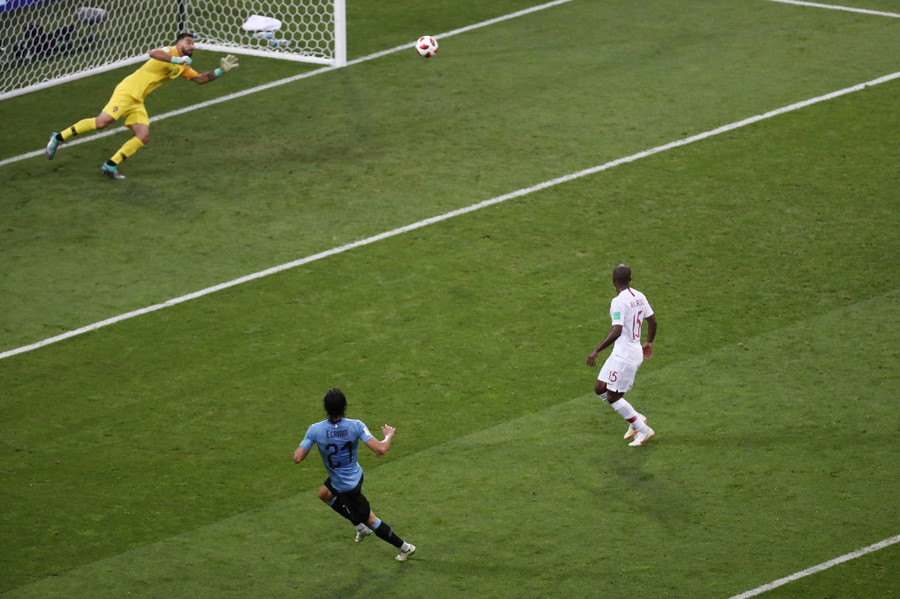 Cavani opened up every inch of his six-foot frame to hit the ball first time and curl a peach around Rui Patricio into the far side of the net. It was a goal worthy of winning any match.

Portugal sensed the urgency and pressed forward after again falling behind. Bernardo Silva missed an open net as Muslera came and couldn’t collect fully a cross from Raphael. The winger could only fire over, but replays suggested he may have kicked the ball out of the keeper’s hands in his efforts to carve out the chance.

Hero Cavani departed the action with less than 20 minutes left, being helped from the pitch by Ronaldo and later being photographed on the bench clutching ice to his lower left leg. 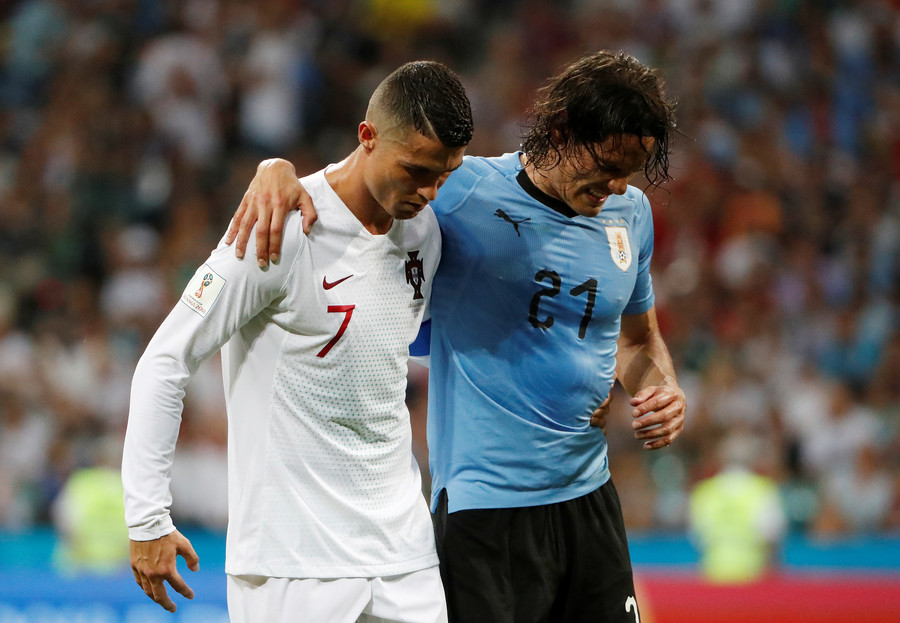 Uruguay uncharacteristically and unrelentingly continued to push although in front, and looked dangerous every time they broke forward as well as defending solidly when Portugal were on the attack.

Suarez played a ball across the box which fell tantalizingly short for Cristhian Stuani. At the other end, Portugal’s bombardment of the Uruguay box smacked of desperation without any real conviction, despite the appearance of Rui Patricio in attack.

All four of the added minutes seeped away and eventually the referee blew up, confirming Ronaldo’s departure from the World Cup. At 33, he may never again have the chance to lift a World Cup, joining Lionel Messi, who crashed out hours before with Argentina, as harboring forlorn hopes of taking his national team to the highest level. With Uruguay’s win, Cavani and Suarez booked a quarter-final date with France in Nizhny Novgorod on July 6. —— AUTO – GENERATED; Published (Halifax Canada Time AST) on: June 30, 2018 at 09:06PM

« UGANDA: Does Museveni have monopoly of smuggling arms to fight military dictatorships? (Previous News)
(Next News) Wikipedia article of the day for July 1, 2018 »

How Corona ruined my family’s Xmas of 2020