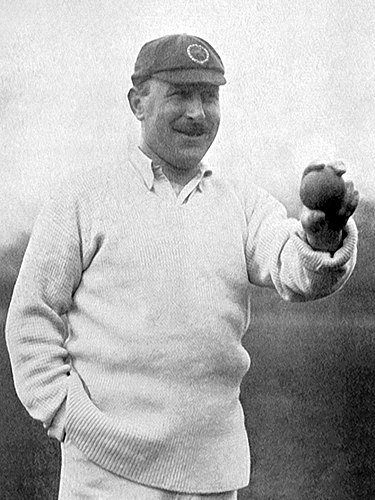 George Hirst (7 September 1871 – 10 May 1954) was a professional English cricketer who played first-class cricket for Yorkshire, mainly between 1891 and 1921. He played in 24 Test matches for England, touring Australia twice. He was a left arm medium-fast bowler and right-handed batsman who completed the double of 1,000 runs and 100 wickets in a season 14 times.

He recorded 36,356 runs and 2,742 wickets taken in first-class cricket and 790 runs and 59 wickets in Tests. Hirst was regarded as a specialist batsman until around 1900, when he learned to make the ball swing in flight, making his bowling difficult to counter.

He scored 341 runs in an innings against Leicestershire in 1905, and made a unique double of 2,000 runs and 200 wickets in 1906. He played in all England’s home Test series between 1899 and 1909, although less successfully than for his county. He played occasionally for Yorkshire after the war, retiring to coach at Eton, while also training youths from other social backgrounds.