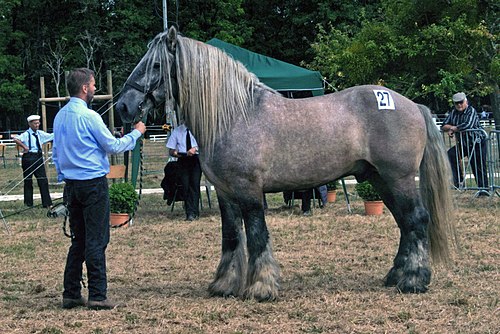 The Poitevin is a French breed of draft horse. Named for the former province of Poitou in west-central France, now a part of Nouvelle-Aquitaine, it originated in the seventeenth century when horses of Flemish or Dutch origin, brought to the area by engineers working to drain the Poitevin Marsh, interbred with local horses.

It may be of any solid coat color, and is sometimes striped dun, a color not seen in other French draft horses. Although it has the size and conformation of a draft horse, the Poitevin has not generally performed draft work.

Its principal traditional use was the production of Poitevin mules, by breeding with large Baudet du Poitou donkeys; the mules were once in worldwide demand for agricultural and other work.

In the early twentieth century there were some 50,000 brood mares, producing between 18,000 and 20,000 mules per year, but the Poitevin is today an endangered breed.