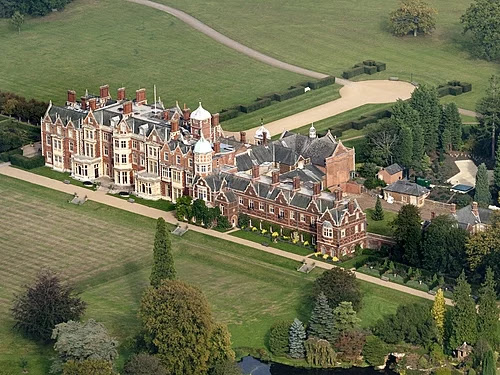 Sandringham House in Norfolk, England, is the private home of Elizabeth II. Although architecturally undistinguished (Pevsner Architectural Guides describing it as “frenetic Jacobean”), the house has been a favoured residence of the Royal family for over 150 years.

The estate was bought in 1862 for Albert Edward, Prince of Wales. Between 1870 and 1900 the house was rebuilt and Edward developed the wider property into one of the best sporting estates in England. George V inherited it in 1910 and in 1932 made the first ever Christmas broadcast from the house. George died at Sandringham on 20 January 1936.
The property passed to his son Edward VIII, and at the abdication, it was purchased by Edward’s brother, George VI. As devoted to the house as his father, he died there on 6 February 1952. On the King’s death, Sandringham was inherited by Elizabeth II. The Queen spends much of the winter at the house, including the anniversary of her father’s death and of her own accession.