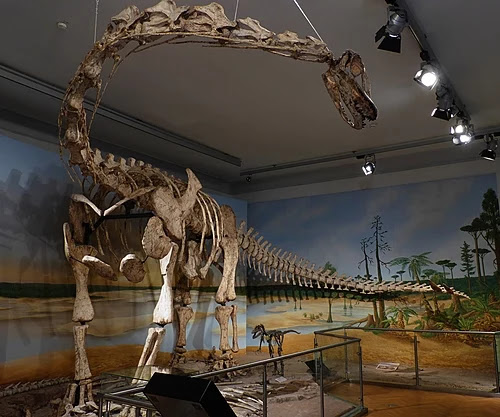 Spinophorosaurus was a sauropod dinosaur that lived around 167 million years ago, during the Middle Jurassic. The first two specimens of the genus were excavated from the Irhazer Shale formation in Niger in the 2000s by German and Spanish teams.

Spinophorosaurus (“spine-bearing lizard”) was the first sauropod to have its skeleton 3D-printed (reconstruction pictured), when the fossils were brought to Europe and digitally replicated. The shoulder height was an estimated 4 m (13 ft), and its weight was about 7 metric tons (7.7 short tons). The braincase was short, deep, and broad, and the teeth were spoon-shaped. The neck contained 13 vertebrae.

The tail was powered by strong musculature and had a rear section that was rather rigid due to long and overlapping chevron bones. Features of the vestibular apparatus suggest that vision and coordinated eye, head, and neck movements were important in Spinophorosaurus. Paired spikes on the tail may have been used for defence.