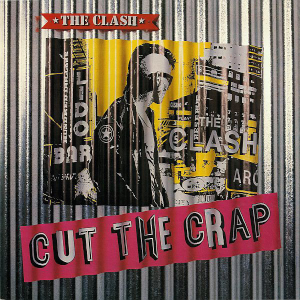 Cut the Crap is the sixth and final studio album by the English punk band the Clash. Released in November 1985, it followed a turbulent period for the band, after the dismissal of co-founder, lead guitarist and principal songwriter Mick Jones and drummer Topper Headon by lead vocalist Joe Strummer (pictured) and bassist Paul Simonon.

They were replaced by the unknowns Vince White, Nick Sheppard, and Pete Howard, as manager Bernie Rhodes fought for control over songwriting and musical direction during tense recording sessions, and Simonon refused to take part in any activity involving Rhodes.

The album’s final production, as engineered by Rhodes, relied heavily on synthetic drum sounds and sampling, and was widely derided. Upon its release, Strummer disowned the album, split the band, and moved to Spain. Some critics have found merit in Strummer’s songwriting and vocal performance, especially on the single “This Is England”, although the album is still generally regarded as the band’s worst.