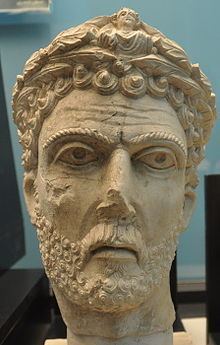 Odaenathus (c. 220 – 267) was the founder of the Palmyrene Kingdom. Born into an aristocratic family of Palmyra, Syria, he became the lord of the city in the 240s. By 258, he was a consularis, a position of high status in the Roman Empire.

In 260 the Roman emperor Valerian was captured by the Sassanian emperor Shapur I, leaving the eastern Roman provinces at the mercy of the Persians. Odaenathus fought the Persians, reclaiming the entirety of the Roman lands they occupied.

By 263, following a successful campaign in which he besieged their capital Ctesiphon, Odaenathus took the title traditionally held by Persian emperors, King of Kings, and gained effective control of the Levant, Roman Mesopotamia and Anatolia’s eastern region.

He was assassinated in 267 during or immediately after a campaign in Anatolia. He was succeeded by his son Vaballathus under the regency of his widow Zenobia, who used the power base established by Odaenathus to forge the Palmyrene Empire in 270.

« UGANDA: MPs should learn English; it is the official language (Previous News)
(Next News) NTVUganda has added Have we lost the corruption fight? video »