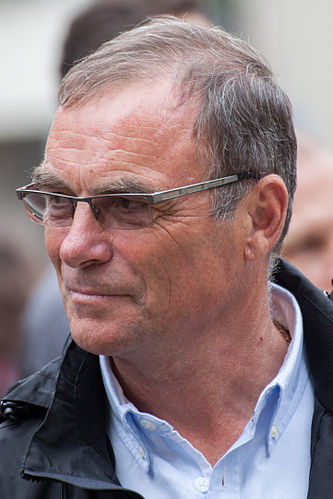 Bernard Hinault (born 14 November 1954) is a former professional cyclist from France. With 147 professional victories, he is often named among the greatest cyclists of all time.


Hinault started cycling as an amateur in his native Brittany before turning professional in 1975. His successes in the Grand Tours include five victories at the Tour de France, three at the Giro d’Italia and two at the Vuelta a España. He was also successful in one-day races, winning, among others, the 1980 Liège–Bastogne–Liège (run on snow-covered roads), the 1981 Paris–Roubaix and the World Road Race title in 1980.


His principal rivals included Joop Zoetemelk, as well as former teammates Laurent Fignon and Greg LeMond, with whom he battled during the Tours in 1985 and 1986, before retiring at the end of that year. He remains the most recent French winner of the Tour de France. Throughout his career, Hinault was known by the nickname le blaireau, or “badger”, for his aggressive racing.

Did you find apk for android? You can find new Free Android Games and apps.
Sharing is caring:
wikipedia, Sports wikipedia, Sports Comments Off on Wikipedia’s Article of the Day November 14, 2019: Bernard Hinault Print this News