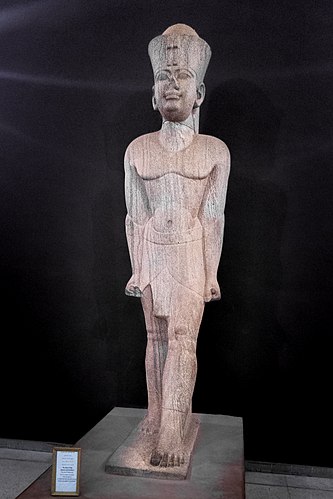 Atlanersa was a Kushite ruler of the Napatan kingdom of Nubia in modern-day Sudan, reigning for about a decade in the mid-7th-century BC. He was the successor of Tantamani, the last ruler of the 25th Dynasty of Egypt, and possibly a son of Taharqa.

Atlanersa’s reign immediately followed the collapse of Nubian control over Egypt, which witnessed the conquest by the Assyrians and then the beginning of the Late Period under Psamtik I.

PThe same period also saw the progressive cultural integration of Egyptian beliefs into the Kushite civilization. Atlanersa built a pyramid in the necropolis of Nuri, which produced many small artefacts now on display in the Museum of Fine Arts in Boston. Atlanersa’s most prominent construction is his temple to the syncretic god Osiris-Dedwen in Jebel Barkal, which he was able to finish and partially decorate.

The temple entrance was to be flanked with two colossal statues of the king, one of which was completed and set in place and is now in the National Museum of Sudan.

Pompeo in Sudan, top US official to visit since uprising