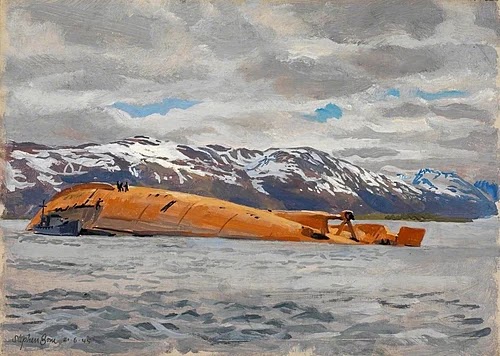 Operation Catechism was a British air raid of World War II that resulted in the destruction of the German battleship Tirpitz (depiction shown). On 12 November 1944, 29 Royal Air Force heavy bombers targeted the battleship at an anchorage near the Norwegian city of Tromsø.

The ship capsized after being struck by at least two bombs and damaged by the explosions of others, killing between 940 and 1,204 members of the crew. Rescuers picked up hundreds of her crew from the water, but few of those trapped within the hull were saved.

The British bombers were unmolested by a unit of German fighter aircraft stationed near Tromsø, and only one was significantly damaged by anti-aircraft artillery.  The attack marked the end of a long-running series of air and naval operations against Tirpitz.

The battleship’s destruction was celebrated in Allied countries, as well as by Norwegian civilians, and is commemorated by several memorials and displays in museums.