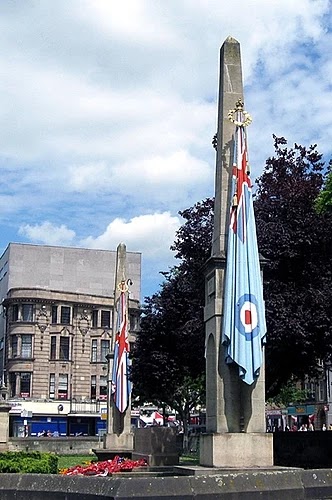 Northampton War Memorial is a First World War memorial on Wood Hill in the centre of Northampton, the county town of Northamptonshire, in central England.

Designed by architect Sir Edwin Lutyens and unveiled on 11 November 1926, it stands in a small garden in what was once part of the churchyard of All Saints’ Church. It is one of the more elaborate town memorials in England, with a pair of obelisks, characteristic of the Lutyens war memorials, and a Stone of Remembrance, which he designed for the Imperial War Graves Commission.

Stone flags appear as if draped on the obelisks; this feature is shared by several of his memorials, but was rejected for his Cenotaph in London. Today the Northampton War Memorial is a Grade I listed building; it was upgraded from Grade II in 2015 when the Lutyens war memorials were declared a “national collection” and all were granted listed building status or had their listing renewed.