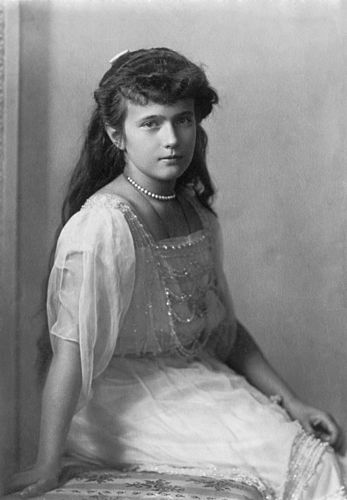 She was murdered with her family by members of the Cheka, the Bolshevik secret police. The location of her burial was unknown during the decades of Communist rule, and rumors that she had escaped circulated after her death.
A mass grave near Yekaterinburg which held the remains of the Tsar, his wife, and three of their daughters was revealed in 1991, and the bodies of the remaining daughters were discovered in 2007.
Forensic analysis and DNA testing have confirmed that the remains are those of the imperial family, showing that Anastasia and the other grand duchesses were killed in 1918.
Several women have claimed to be Anastasia, including Anna Anderson, who died in 1984, but DNA testing in 1994 showed that she was not related to the Romanov family.

Did you find apk for android? You can find new Free Android Games and apps.
Sharing is caring:
education Education Comments Off on Wikipedia’s Article of the Day July 17, 2018: Grand Duchess Anastasia Nikolaevna of Russia Print this News

« Wikipedia article of the day for July 17, 2018 (Previous News)
(Next News) UGANDA: NTVUganda has added ON THE GROUND: Drawing the line between migration officers and the Civil Aviation Authority video »