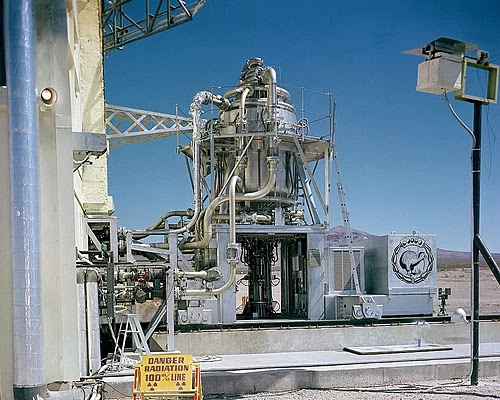 Project Rover was a nuclear thermal rocket project that ran from 1955 to 1973. Beginning as a United States Air Force project to develop a nuclear-powered upper stage for an intercontinental ballistic missile, it was transferred to NASA in 1958 after the Sputnik crisis triggered the Space Race.

Nuclear reactors for Project Rover were built and tested at the Los Alamos Scientific Laboratory at very low power and then shipped to Area 25 (known as Jackass Flats) at the Nevada Test Site. Project Rover produced two large reactors, Kiwi (pictured) and Phoebus, and a smaller reactor, Pewee, conforming to the smaller budget available after 1968.

The reactors were fueled by highly enriched uranium, with liquid hydrogen used as both a rocket propellant and reactor coolant. Their efficiency was roughly double that of chemical rockets. Project Rover was canceled in 1973, and none of the reactors developed ever flew.