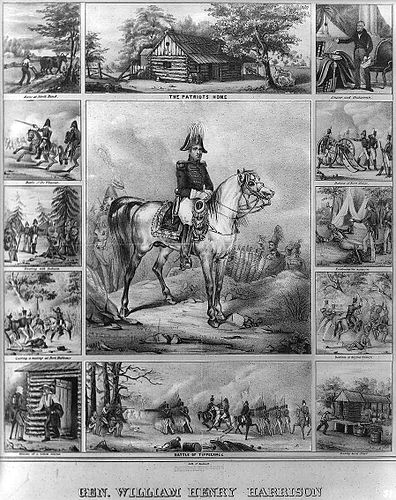 The Wikipedia article of the day for November 3, 2020 is William Henry Harrison 1840 presidential campaign.
William Henry Harrison’s 1840 presidential campaign elevated Harrison, who had served as a general and in the U.S. Congress, to the presidency after at least four years of seeking the office. In the election, Harrison defeated the incumbent Democrat, Martin Van Buren, in a campaign that broke new ground in American politics. Among other firsts, Harrison’s victory was the first time the Whig Party won the presidency. Harrison gained the nomination over Henry Clay and Winfield Scott. Many of his rallies took on a carnival atmosphere, growing to unprecedented size. He made speeches to some of them, breaking the custom that presidential hopefuls not campaign. Harrison’s death in April 1841 marked the first time an American president failed to complete his term; he was succeeded by Vice President John Tyler. The unofficial campaign motto, “Tippecanoe and Tyler Too”, has been called the most famous presidential campaign slogan in American history.