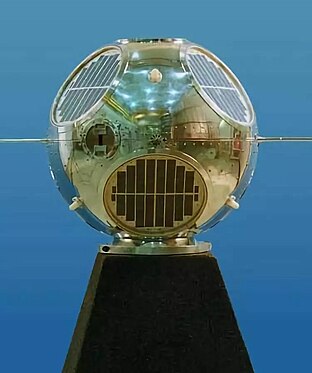 The Wikipedia article of the day for June 22, 2019 is SOLRAD 1.
SOLRAD 1 was a science and surveillance satellite launched into orbit on June 22, 1960. Developed by the US Naval Research Laboratory, it was the first satellite to successfully observe solar X-rays, the first to conduct surveillance from orbit, and the first to be launched with another instrumented satellite (the unrelated navigation satellite, Transit 2A). The scientific mission was a success, sending data that determined normal solar X-ray output and confirmed the connection between increased solar X-ray activity and radio fade-outs. The Galactic Radiation and Background electronic surveillance package on board had a covert mission: mapping the Soviet Union’s air defense radar network. This mission was also successful, operating through September 22, 1960, and revealing that the network was more extensive than had been expected. SOLRAD 1 was switched off in April 1961, making it the first satellite to be remotely deactivated.

Did you find apk for android? You can find new Free Android Games and apps.
Sharing is caring:
education Education Comments Off on Wikipedia article of the day for June 22, 2019 SOLRAD 1 Print this News

UGANDA: Your net worth is your network – @PearsonCollege.ca