Wikipedia article of the day for June 20, 2019 Echo parakeet 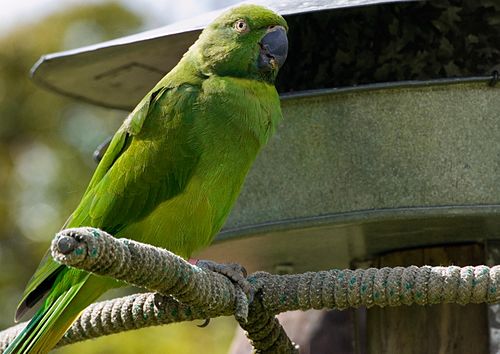 The Wikipedia article of the day for June 20, 2019 is Echo parakeet.
The echo parakeet (Psittacula eques) is a species of parrot endemic to the Mascarene Islands of Mauritius and formerly Réunion. It is the only living native parrot of these islands; all others have become extinct due to human activity, including the subspecies P. e. eques, the Réunion parakeet. The echo parakeet is 34–42 cm (13–17 in) long and weighs 167–193 g (5.9–6.8 oz), with a wing-span of 49–54 cm (19–21 in). It is generally green; the male has one black and one pink collar, and the female has one green and one black. It is largely restricted to the canopy of the Black River Gorges National Park in the south west of Mauritius, feeding mainly on the fruits and leaves of native plants. Due to destruction and alteration of its native habitat, its numbers declined throughout the 20th century, reaching as few as 8–12 in the 1980s, when it was referred to as “the world’s rarest parrot”. An intensive effort of captive breeding has saved the bird from extinction.

Did you find apk for android? You can find new Free Android Games and apps.
Sharing is caring:
education Education Comments Off on Wikipedia article of the day for June 20, 2019 Echo parakeet Print this News