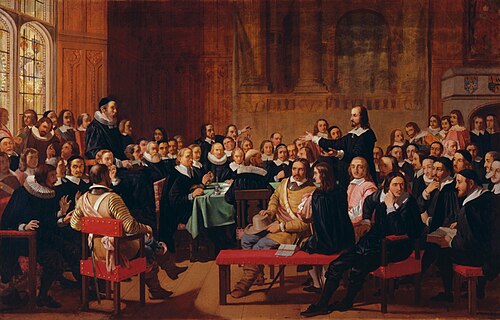 The Wikipedia article of the day for July 1, 2018 is Westminster Assembly.
The Westminster Assembly (1 July 1643 – 1653) was a council of theologians and members of the English Parliament appointed to restructure the Church of England. As many as 121 ministers were called to the Assembly, with 19 replacements added later. The Assembly worked in the Reformed Protestant theological tradition, also known as Calvinism. It produced new standards for church governance, a Confession of Faith or statement of belief, two catechisms or manuals for religious instruction, and a liturgical manual, the Directory for Public Worship, for the Church of England and Church of Scotland. The Confession and catechisms were adopted as doctrinal standards in the Church of Scotland and other Presbyterian churches, where they remain normative. Amended versions of the Confession were also adopted in Congregational and Baptist churches in England and New England in the 17th and 18th centuries. The Confession became influential throughout the English-speaking world, but especially in American Protestant theology.

Did you find apk for android? You can find new Free Android Games and apps.
Sharing is caring:
wikipedia, article of the day, Westminster Assembly Entertainment, Education Comments Off on Wikipedia article of the day for July 1, 2018 Print this News