Why do African countries try to export their corruption? Kenya’s Amina Mohamed out of WTO leadership race 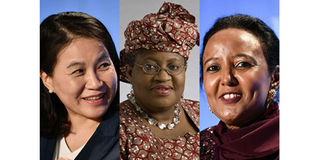 Amina Mohamed out of WTO leadership race
Thursday, October 08, 2020
What you need to know:

A woman will become director-general of the World Trade Organization for the first time, after the race narrowed down to two candidates.

Nigeria’s Ngozi Okonjo-Iweala and South Korea’s Yoo Myung-hee made it through on Thursday to the final run-off to lead the World Trade Organization.

Kenya’s Amina Mohamed missed the cut to advance to the next stage.

Roberto Azevedo stepped down as WTO chief in August a year ahead of schedule. The initial pool of eight candidates to replace the Brazilian career diplomat was narrowed down to five in last month’s first round.
Okonjo-Iweala and Yoo saw off competition from Britain’s Liam Fox, Ms Mohamed and Saudi Arabia’s Mohammad al-Tuwaijri in the second round of the battle to become the next WTO director-general.

On Monday, the 27-member European Union endorsed Nigeria’s Ngozi Okonjo-Iweala, and Yoo Myung-hee of South Korea to battle it out in the final round.

Other candidates include Mr Mohammad Maziad Al-Tuwaijri of Saudi Arabia and Dr Liam Fox of the UK.

The EU, a diplomatic source told the Nation, was looking for the “best candidate” while staying on the safe side.

By choosing two women, one from South Korea (a developed country) and the other from Nigeria (a developing country), the European bloc wants to ensure a woman leads the WTO for the first time regardless of the region she comes from, according to the source.

Ms Mohamed has campaigned vigorously and directly to countries, including EU’s member states. On Sunday, the East African Community announced it was backing her.

Last week, President Uhuru Kenyatta lobbied for her acceptance when he met with French President Emmanuel Macron in Paris.

The WTO, not a United Nations organisation, usually makes decisions based on consensus from member states. This means that the European Union has no vote at the WTO.

But its influence comes in the way it has representatives at the organisation in Geneva, and the fact that it routinely signs trade agreements with countries across the world.

In fact, it is common practice for candidates to seek endorsement from blocs. The Nigerian, for example, had already been endorsed by the West African bloc, Ecowas.

Wednesday’s announcement will come following three weeks of consultations between envoys of the WTO’s 164-member states, with each nominating two best candidates from among the five. The names that appear most times signal consensus around the candidate.

According to Rules WT/L/509, which guide elections of the director-general, member states consult “to identify the candidate around whom consensus can be built.” So members can consult as many times.

“It is understood that the candidate or candidates least likely to attract consensus shall withdraw,” the rules say.

But since its creation in 1995, the WTO has never been led by an African or a woman.

Did you find apk for android? You can find new Free Android Games and apps.
Sharing is caring:
kenya, business, world news, africa, WTO Africa, WTO, World News, Business, Kenya Comments Off on Why do African countries try to export their corruption? Kenya’s Amina Mohamed out of WTO leadership race Print this News

« Why do African countries try to export their corruption? Kenya’s Amina Mohamed out of WTO leadership race (Previous News)
(Next News) NTVUganda has added FDC picks Amuriat to run for president in 2021 video »