WHO flags Ebola risk in Rwanda, but then withdraws its report 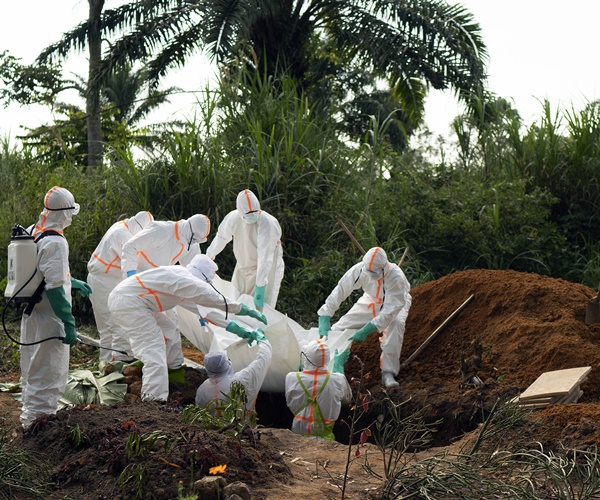 GENEVA (Reuters) – The World Health Organization on Thursday withdrew a report that said an Ebola patient may have entered Rwanda, suggesting the deadly virus could spread to that country for the first time.

The report, and others written by Uganda’s Health Ministry and published as daily updates by the WHO’s Africa office, detailed the case of a Congolese fishmonger who died of Ebola after going to Uganda and vomiting four times.

Thursday’s report said the woman was suspected of going to the Congolese city of Goma and then into neighbouring Rwanda while suffering from Ebola, which is highly contagious and spreads through bodily fluids.

The report said health workers were struggling to track down people with whom she may have had contact in the market. But many of them refused to cooperate, believing she had died from witchcraft or an abortion.

The reports were unusually detailed and candid about investigations of ongoing cases and were published without the knowledge of WHO headquarters in Geneva, which said late on Thursday that several of the reports had been removed. The website where they were posted was also disabled.

“This information concerned the movements of a female fishmonger who contracted Ebola virus disease and is confirmed to have travelled between towns in the Democratic Republic of the Congo and a town in Uganda, while symptomatic.”

The statement did not explain what was unverified in the reports, or mention Rwanda, which is on high alert after a confirmed case of a pastor who later died in the Congolese border city of Goma.

The city of more than 1 million serves as a regional and international gateway and borders Rwanda, which said on Thursday it was intensifying screening at ports of entry and asked citizens to avoid unnecessary travel to Ebola-affected areas.

The American Society of Tropical Medicine and Hygiene said the pastor’s death illustrated “the powder-keg nature” of the outbreak, the second-worst on record, with almost 1,700 deaths since it was declared last August.

On Wednesday, the WHO, reflecting growing concerns that the outbreak might spread, declared an international health emergency, a rare designation aimed at galvanising global support.
VIGILANCE

So far, a campaign of vigilance and vaccination encompassing almost 75 million screenings has effectively kept the outbreak confined to northeast Democratic Republic of Congo.

Three victims died in Uganda last month without spreading Ebola further there, while Rwanda has never had a recorded case.

Mpondwe, the Ugandan border market visited by the fishmonger, has become a focal point for possible contagion beyond Congo.

She vomited there several times on July 11, a few days before she died, and a second fish trader who spent time there died of Ebola in Congo on Tuesday, one of the deleted reports said.

Local official Wilson Agaba said authorities had been slow to send gloves and chlorine solution to medics in the market area, and some residents were refusing to help trace the fishmonger’s contacts for fear of testing positive for Ebola and being isolated.

Jonathan Ball, a professor of molecular virology at Britain’s University of Nottingham, said the latest cases showed current efforts were not effective enough to halt the epidemic, which “is showing no signs of letting up”.

Health workers in the vaccination campaign have at times faced scepticism or hostility from at-risk communities.

“Some Ugandans and Congolese at the border told us that they believe Ebola is witchcraft while others say Ebola is a political tool used (in Congo) …between rival groups to take land and minerals,” Agaba said.

Tests on traders at the market have not found any infected with the virus, said ministry spokesman Emmanuel Ainebyona. The team continued to monitor the traders.

Congo’s health ministry said it accepted the WHO’s designation of an emergency but hoped it was not due to pressure from humanitarian groups looking to raise funds “despite the potential negative and unpredictable consequences for the communities affected, who rely very much on cross-border trade to survive”.

The WHO urged countries not to use the designation to justify trade or travel restrictions. Officials from the Rwandan and South Sudanese governments told Reuters they saw no reason to close their borders with Congo.

Congo’s health minister Oly Ilunga said everyone in Goma who had come in contact with the pastor had been identified and that efforts continued in the cities of Beni and Butembo to locate other contacts.

Did you find apk for android? You can find new Free Android Games and apps.
Sharing is caring:
UGANDA, rwanda, ebola, DR Congo Uganda, Ebola, DR Congo, Rwanda Comments Off on WHO flags Ebola risk in Rwanda, but then withdraws its report Print this News

« Trump disavows ‘send her back’ rally chant, many Republicans alarmed (Previous News)
(Next News) WHO flags Ebola risk in Rwanda, but then withdraws its report »