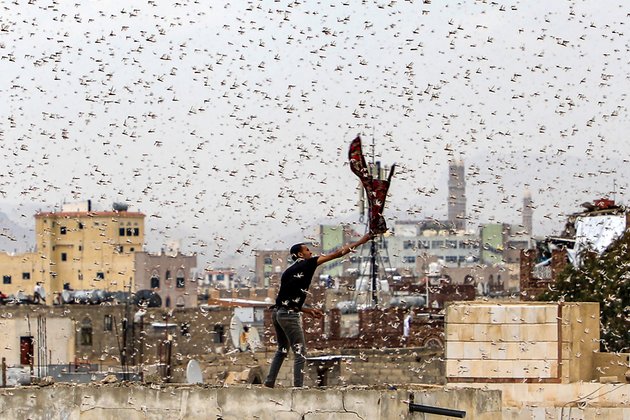 WASHINGTON/SANA’A (Voa News) – A crippling war drags on in Yemen and nature has taken its place in the fight. Swarms of red desert locusts have been spotted flying through Sana’a skies, threatening what is left of Yemeni agricultural production, and adding to the country’s already acute food insecurity.

Saleh Mohammed worries about supporting his family and ironically turns to the plague itself for relief. He and his five children try to collect locusts from their roof to sell as food. But even that is not working out so well despite the abundance. One locust bag they would normally sell for $70 can now only be sold for $12.

The World Food Program reports that 10 million Yemenis require humanitarian food assistance, and the population is currently on the brink of widespread starvation. The WFP had recently stopped aid to Yemen over accusations that the Houthis were diverting food aid to fund the war. Houthi spokesman Mohammed Ali al-Houthi tweeted that the rebel group, who ousted the internationally recognized government in 2014, has now worked out a deal with the WFP to reinstate aid.

As of September, the WFP reported delivering food relief and broke its previous two-month long suspension. The Houthis agreed to implementing iris scanning and facial recognition to ensure deliveries go to those most in need. Nevertheless, Yemen still stands as the world’s largest humanitarian crisis and the locust infestation puts the country at risk for plunging even further into catastrophe. If the swarms are not managed, they pose an all-time high risk to crops.

Over the last three months, international organizations have monitored the swarms’ movement. The Food and Agriculture Organization, FAO, has tracked a near doubling in swarm size.

Yemenis commonly eat locusts, and the first spotted swarms that entered all three districts of Hamdan, Arahb, and Bani Matar were caught and eaten within days. But the swarms seen this week are different from the swarms consumed three months ago, and are not being as readily tackled as they previously were.

Sana’a residents reported seeing warnings on social media that that worms had contaminated the insects. Aid recipients reportedly debate whether they should hold out for a full WFP food aid package or risk wormy locusts. “When you pull the head of the locust away, you find three to four worms in it,” Rajeh al-Hiyafi, a farmer, told VOA.

Ayoub Mohammed, a Yemeni who was driven from his home from the war, responded that the Houthi/WFP aid standoff resulted in smaller food packages, including only half the amount of oil, lentils, and wheat. His family is hungry, but even so, they will not endure wormy locusts.

Farming in Yemen is already challenging due to the war. Fuel scarcity, drought, and destroyed roads are making farming crops extremely difficult. However, in certain areas, Yemeni families do not have access to crops and are entirely dependent on WFP rations. The days in between aid negotiations left numerous families without any food and the population teetered on starvation.

If not contained, the FAO reports that a small swarm can eat the same amount of food that would be consumed by approximately 35,000 people. The reproducing rate of locusts also causes concern, as a single female can lay up to 300 eggs.

The FAO also reports that Yemen lacks funding and equipment to properly prepare for the problems the locusts pose to Yemeni agriculture. The internationally recognized Yemen government, financially backed by Saudi Arabia, concludes that there is little it can do to address the problem as they cannot work in areas that the Houthis control.

However, Houthi authorities said they have received notes from worried farmers and are taking action after locusts destroyed the majority of crops in southwestern and eastern Sana’a.

Houthi official Ameen Al-Zarqa is the head of the Field Survey Team at the Desert Locust Control Center. Using its limited resources, he said the center has carried out several campaigns to fight desert locusts. “These measures are still not enough,” he said. Civilians interviewed by VOA reported that they had not seen or heard of either government initiatives or preventative measures being undertaken.

While the two opposing forces continue their struggle, the swarms of insects are spreading to nearby regions as they travel along the coastline. FAO recently stated, “In the worst-case scenario, swarms could migrate from Yemen in the autumn to the Horn of Africa and reach Kenya by the end of the year.”

Damage control operations and crop protection measures have already begun in the nearby regions of Sudan, Eritrea, and Saudi Arabia.

Did you find apk for android? You can find new Free Android Games and apps.
Sharing is caring:
war, world news, Yemen, Locusts, The Plague Yemen, War, Locusts, The Plague, World News Comments Off on War Plagues Yemen, Then Come the Locusts Print this News

« Mugabe dies; liberated Zimbabwe, then held it hostage for 37 years (Previous News)
(Next News) Why South Africans should resist blackmail by some African states »