Victoria Falls, one of the natural wonders of the world, is running dry due to climate change

Victoria Falls, known locally as Mosi-oa Tunya, (“The Smoke that Thunders”), has seen its water levels slow to a relative trickle this dry season as drought ravages the region due to the impact of climate change. The drought, which already threatens the livelihoods of regional farmers, could also hurt the tourism industries in Zimbabwe and Zambia.

This year the two southern African nations have experienced a long-running drought which has resulted in incessant power cuts due to a reliance on hydroelectric power. It has also left over five million people in need of food aid in Zimbabwe alone.

Victoria Falls is one of the seven natural wonders of the world and designated as a UNESCO World Heritage site which describes it as the” largest curtain of falling water in the world.” It is a major tourist attraction for both Zambia and Zimbabwe and local businesses in each country compete to have visitors come to their side of the falls.

The storied falls stretch for a kilometer across the border with a drop of some 110 meters. It was renamed for Britain’s Queen Victoria by the Scottish explorer David Livingstone in 1855 who described it in his writing as one of the most beautiful sights he had witnessed.

In 2017, Victoria Falls was the third most visited falls in the world with 500 000 visitors, after Niagara Falls in the US (12 million) and Iguazu Falls in Brazil (1,7 million). The fall runs on the border of Zambia and Zimbabwe and both countries benefit from the tourist attraction. Tourists to the falls are often able to walk across the border to either country.

During this year’s dry season the falls have dried up at unprecedented levels as the Zambezi river, which feeds it, has shrunk.

These photos from Reuters’ photographer Mike Hutchings captures the current state of the falls from both the Zimbabwe and Zambia sides in the last few days.

REUTERS/MIKE HUTCHINGSVisitors walk over a bridge as dry cliffs are seen along the parched gorge on the Zambian side of Victoria Falls, Zambia, following a prolonged drought, Dec. 5, 2019.

Zimbabwe, which is the midst of one of its worst economic downturns since independence in 1980, is already feeling the pinch of a slowdown in tourist arrivals. In the first half of the year arrivals declined by 3% to 1.11 million from 1.15 million recorded in the same period in 2018.

With Victoria Falls losing some of its natural appeal, tourist numbers are are at risk of declining further. But a spokesman for Zimbabwe Tourism Authority said there had been no impact on tourist visits to date and described the issue as mostly seasonal.

“The flow of water through the falls varies throughout the year with the highest level in April to June and the lowest flow from October to December. The flow is influenced by the rains in the catchment area of the Zambezi River above the falls, which is in north-western Zambia, Angola and DRC,” said the ZTA spokesman.

REUTERS/MIKE HUTCHINGSA dry section of the Zambezi river is seen above the gorge on the Zambian side of Victoria Falls, Zambia, following a prolonged drought, Dec. 5, 2019.

Statistics from the Zambezi River Authority (ZRA) show, “flows at Victoria Falls increased during the week under review before closing at 252m3/s on 9th December 2019. Last year on the same date, the flow was 234m3/s.” Director of climate change at Zimbabwe’s ministry of lands, Washington Zhakata told Quartz Africa that the Victoria Falls is not drying up but “there are years of high flows and other years of lower flows.”

The drought has had a significant impact on Zimbabwe’s electricity supply, power utility, the Zimbabwe Electricity Supply Authority, early this year introduced 18-hour load shedding after reducing its electricity generation due to low water levels in Lake Kariba which is on the Zambezi River, downstream of Victoria Falls.

The lake level continued receding, dropping by 11cm during the week under review, before closing at 476.93m (10% usable storage) on Dec. 9, according to ZRA. Last year on the same date, the Lake level was 483.06m. 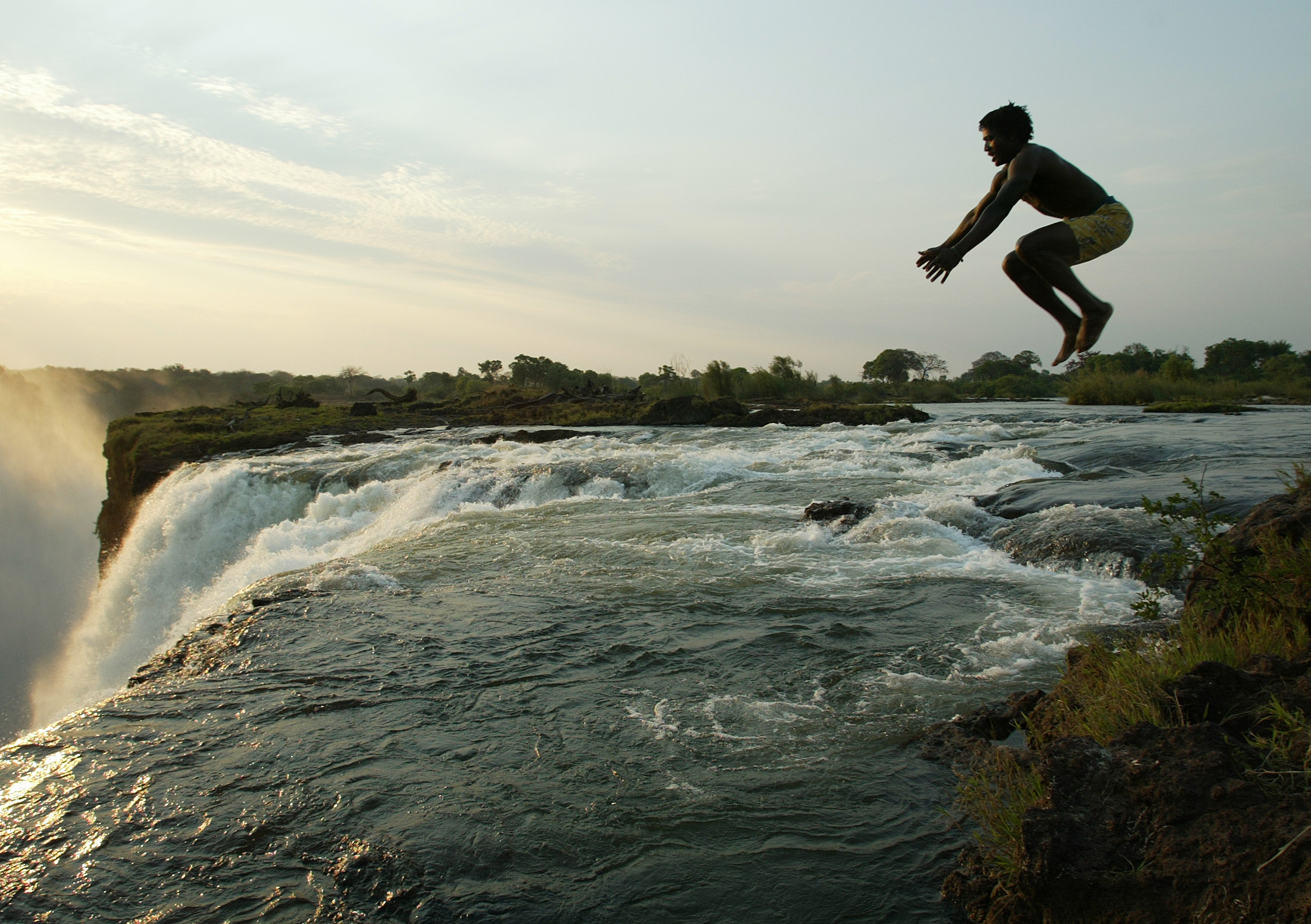 REUTERS/HOWARD BURDITTBack in 2004: A Zambian man jumps into a pool at the edge of the 110 metre high main falls of the Victoria Falls on the Zambezi River 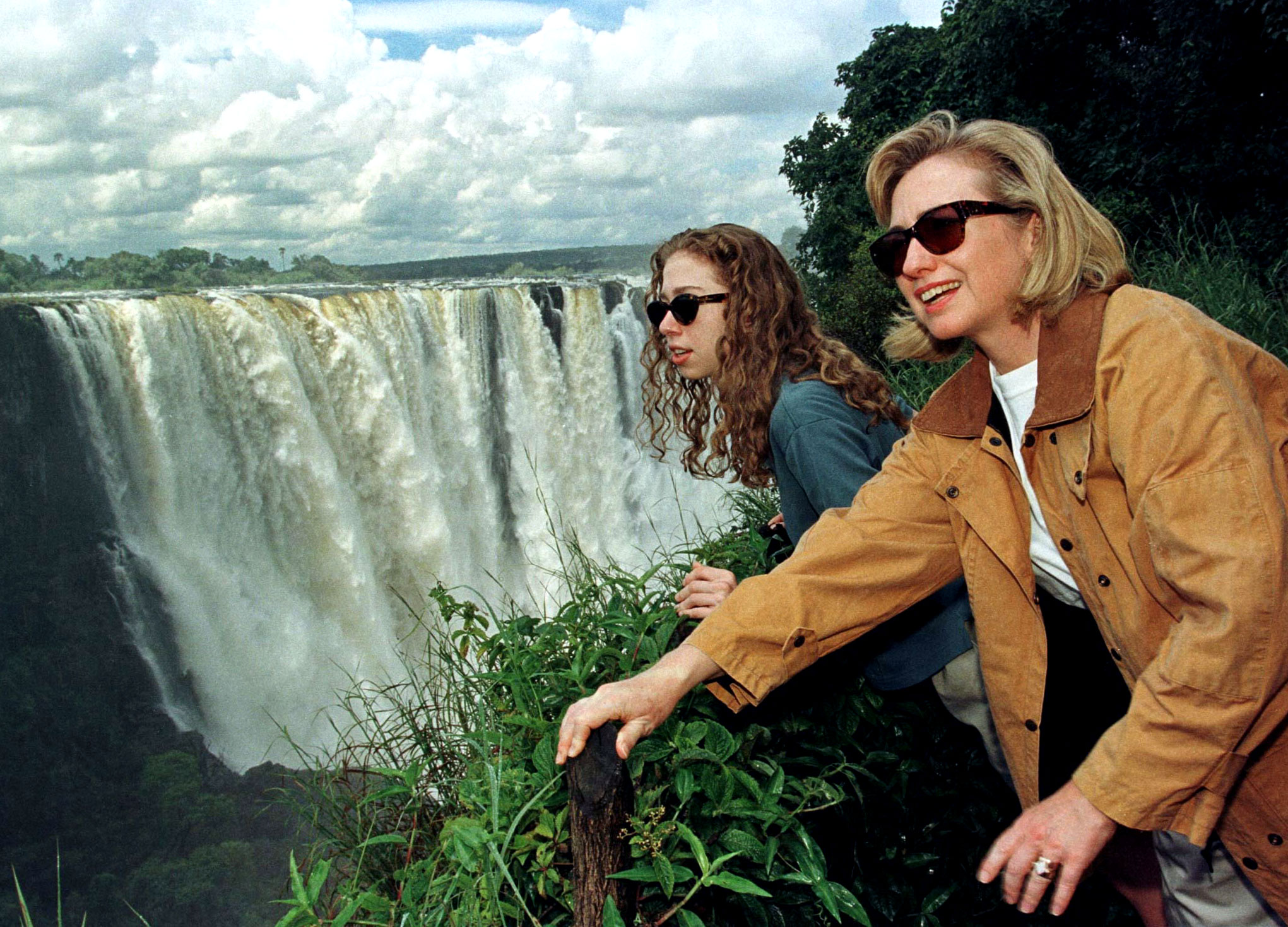