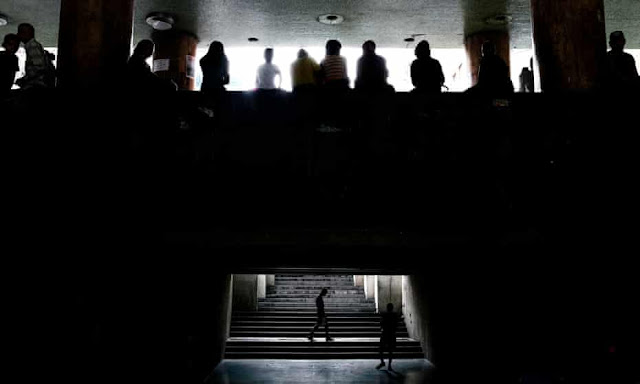 By Reuters in Caracas & The Guardian

Venezuela has been hit by a nationwide power outage which the government has blamed on an “electromagnetic attack” on the nation’s hydroelectric system.

The information minister Jorge Rodríguez said authorities were working to restore electricity as quickly as possible after at least 14 of Venezuela’s 24 states – including the capital Caracas – lost power on Monday afternoon.

Venezuela blackout: what caused it and what happens next?

He appealed for calm and said contingency plans had been activated so that medical facilities would not be affected. Security forces were also being deployed to guarantee public safety.

Venezuela suffered a series of blackouts in March that left millions of people without running water and telecommunications. The power cuts were the worst in decades and exacerbated an economic crisis that has halved the size of the economy.

Rodríguez did not give any details of the alleged electromagnetic attack but the government blamed the March blackouts on a US-sponsored attempt to disrupt the Guri dam hydro facility, which provides around 80% of the nation’s power.

Venezuela’s national power grid has fallen into disrepair after years without investment and insufficient maintenance, according to the opposition and power experts.

Power returned for about 10 minutes to parts of south-eastern Bolivar state, site of the Guri dam but went out again, according to a Reuters witness.

Electricity was still out throughout Caracas.

“It terrifies me to think we are facing a national blackout again,” said Maria Luisa Rivero, a 45-year-old business owner from the city of Valencia, in the central state of Carabobo.

“The first thing I did was run to freeze my food so that it does not go bad like it did like the last time in March. It costs a lot to buy food just to lose it,” she said.

The oil-rich country’s hyperinflationary economic crisis has led to widespread shortages in food and medicine, prompting more than four million Venezuelans to leave the country.

“These blackouts are catastrophic,” said 51-year-old janitor Bernardina Guerra, who lives in Caracas. “I live in the eastern part of the city and there the lights go out every day. Each day things are worse.”

Did you find apk for android? You can find new Free Android Games and apps.
Sharing is caring:
world news, Venezuela, Maduro Venezuela, Maduro, World News Comments Off on Venezuela: blackout hits Caracas and other states in latest power outage Print this News

« Wikipedia article of the day for July 23, 2019 Coinage Act of 1965 (Previous News)
(Next News) NTVUganda has added KICK STARTER : Victim of the Lusanja land row speaks out video »