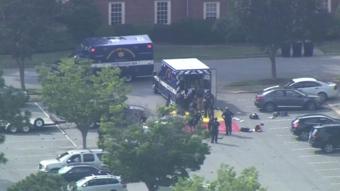 The injured have been taken to local hospitals
By BBC, NEWS AGENCIES

Eleven people were killed and six others injured in a mass shooting at a government building in the US state of Virginia, police said.

The gunman, whose identity was not released, was killed when police responded to the incident.

Reports of the shooting started shortly after 16:00 (20:00 GMT) on Friday.
Police Chief James Cervera said the gunman returned fire on police officers but was killed in the exchange.

A police officer was among the six wounded after a bullet struck his vest, Chief Cervera told reporters.


Police said they believed the gunman had acted alone, but the motive for the shooting was not immediately clear.
“This is the most devastating day in the history of Virginia Beach,” the mayor, Robert Dyer, told reporters at a press conference. 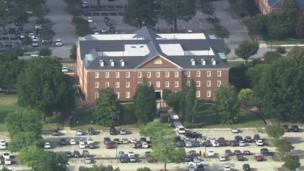 Image copyright REUTERS
The shooting was at a building in Virginia Beach Municipal Center
The area around the building, which contains a range of city government buildings, was put into lockdown and employees were evacuated.

“We just heard people yelling and screaming at people to get down,” Megan Banton, an administrative assistant in the building, told local television news station WAVY.

Another employee told the AP news agency she and others heard shooting, but didn’t think the gunfire was close.
“I just thank god they were able to alert us in time, because if it had been 10 minutes more we would have all been outside,” Sheila Cook said. 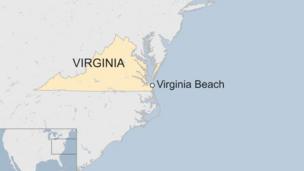 Virginia governor Ralph Northam described the incident as a “tragic day” for the city and the state.

“My heart breaks for the victims of this devastating shooting, their families, and all who loved them,” he said on Twitter. “I am on my way to Virginia Beach now and will be there within the hour.”

The FBI was at the scene helping local authorities investigate the shooting, US media reported.

According to US tracking website Gun Violence Archive the incident is the 150th mass shooting incident in the US this year.