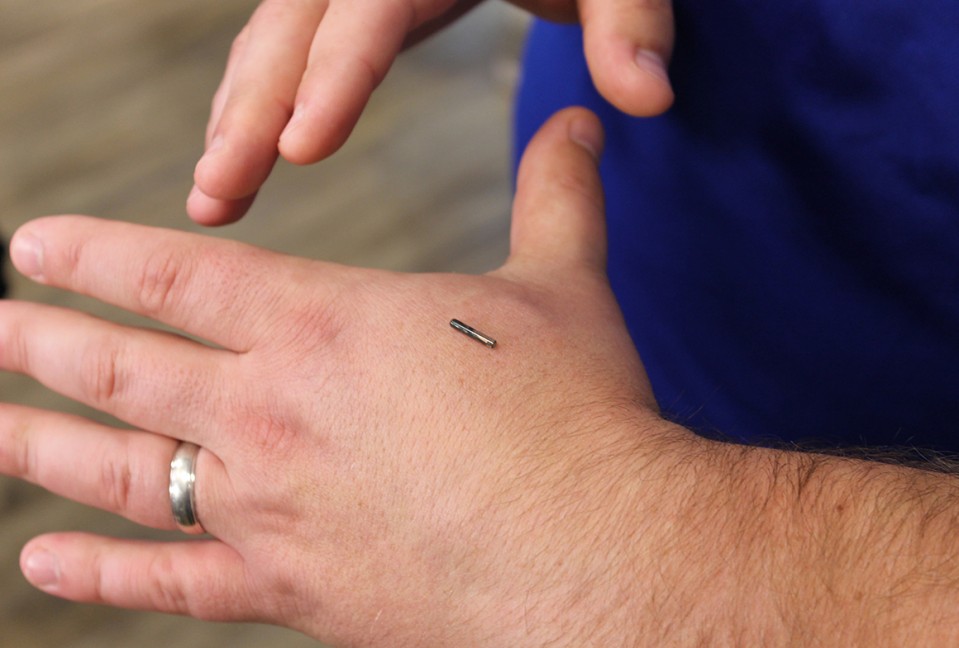 The microchips Three Square Market employees had injected in their hands are about the size of a big grain of rice.  THREE SQUARE MARKET

This company embeds microchips in its employees, and they love it
By MIT TECHNOLOGY REVIEW
Posted on Aug 17, 2018
Last August, 50 employees at Three Square Market got RFID chips in their hands. Now 80 have them.

When Patrick McMullan wants a Diet Dr Pepper while he’s at work, he pays for it with a wave of his hand. McMullan has a microchip implanted between his thumb and forefinger, and the vending machine immediately deducts money from his account. At his office, he’s one of dozens of employees who have been doing likewise for a year now.

McMullan is the president of Three Square Market, a technology company that provides self-service mini-markets to hospitals, hotels, and company break rooms. Last August, he became one of roughly 50 employees at its headquarters in River Falls, Wisconsin, who volunteered to have a chip injected into their hand.

The idea came about in early 2017, he says, when he was on a business trip to Sweden—a country where some people are getting subcutaneous microchipsto do things like enter secure buildings or book train tickets. It’s one of very few places where chip implants, which have been around for quite a while, have taken off in some fashion.

The chips he and his employees got are about the size of a very large grain of rice. They’re intended to make it a little easier to do things like get into the office, log on to computers, and buy food and drinks in the company cafeteria. Like many RFID chips, they are passive—they don’t have batteries, and instead get their power from an RFID reader when it requests data from the chip (McMullan’s chip includes identifying information to grant him access to the building, as well as some basic medical information, for instance).

A year into their experiment, McMullan and a few employees say they are still using the chips regularly at work for all the activities they started out with last summer. Since then, an additional 30 employees have gotten the chips, which means that roughly 80 of the company’s now 250 employees, or nearly a third, are walking, talking cyborgs.

“You get used to it; it’s easy,” McMullan says. As far as he knows, just two Three Square Market employees have had their chips removed—and that was when they left the company.

Sam Bengtson, a software engineer, says he uses his chip 10 to 15 times a day. At this point, swiping his hand over an RFID reader plugged into his computer is no different from typing in his password on a keyboard, he says.

Steve Kassekert, vice president of finance, is so used to using his hand to pay for soda at work that he was annoyed when the RFID reader on the vending machine went down a couple of months ago.

“It’s just become such a part of my routine,” he says.

The company is also exploring some ways to use microchips outside the body. McMullan says in August and September it is running tests at two hospitals—one in Fort Wayne, Indiana, and another in Hudson, Wisconsin—that will verify when doctors and nurses wash their hands. (They’ll wear bracelets incorporating a chip that they can scan on an RFID reader to turn on a sink—something that has been tried before.)

Nick Anderson, an associate professor in public health sciences at the University of California, Davis, says the privacy and security of any information stored on the chips is an obvious concern. The information gathered by readers could give lots of details about employees’ comings and goings, and someone could in theory ping your chip with a reader to find out what’s on it.

McMullan says only some of the information stored on the chip in his hand is encrypted, but he argues that similar personal information could be stolen from his wallet, too.

There’s also the chance—and it seems certain to happen eventually—that the technology inside the employees’ bodies will become outdated. Bengtson, at least, is concerned about this.

“There may need to be a—dare I say—upgrade program, or something like that,” he says.

« Climate Change is no longer fake, listen to our kids on #ClimateStrike (Previous News)
(Next News) USA company embeds microchips in its employees »

Strategies for jobs in Africa in the digital age