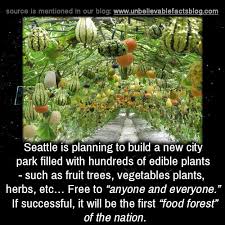 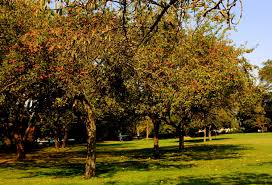 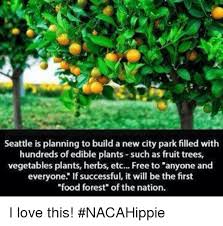 In These Cities, Your Next Snack May Be Growing in a Public Park
By TAKEPART.COM

Fruit is free in these urban centers, thanks to food-bearing plants and trees growing right next to skyscrapers.

For food-loving travelers, stopping at the farmers market or a local food-minded restaurant is a requisite part of visiting a new city. But as you travel this summer, know that in some cases you may not have to enter a shop or even get out your wallet to enjoy the local bounty. That’s because an increasing number of cities are building edible landscapes—trees and plants bearing fruit, nuts, and even spices—right into the cityscape. Next time you’re in one of these five cities, look up, down, and around. Your next snack may be right in front of you.

No wonder Seattle is called the Emerald City: Greenery abounds here, both inside and outside the city limits. And even within the urban core, all those trees add up to free fruit, as Seattle has become a national leader in growing food in public places. For instance, Brandon Street Orchard was founded in 2003 and is a growing “community, side by side, with Asian pears, European pears, Italian prunes, apples, blueberries, kiwi and currants.” The seven-acre Beacon Food Forest, nestled amid the Beacon Hill neighborhood a couple miles from downtown, is nearing completion and should be bearing fruit in short order.

If you’re walking Freedom Trail this summer, stop and grab a peach, a juicy cherry, or a crisp apple—it’s patriotic! After all, the Cradle of Liberty is where the first apple orchards in the New World were planted. The Boston Tree Party is attempting to revive this tradition with a revolutionary idea: Combine civic engagement and fruit-tree planting throughout the city. In just a few years, more than 108 fruit trees have been planted in and around Boston. The Boston Natural Areas Network has also been planting and preserving the city’s orchards for years, including at a number of schools.

The southern Appalachians are said to have the earth’s greatest biodiversity outside the tropics, with more than 100 wild foods available—and cultivated varieties happily grow there too. Asheville’s George Washington Carver Edible Park, planted just minutes from downtown in 2002, features 40 varieties of fruit and nut trees, including figs, apples, pears, chestnuts, hazelnuts, plums, and peaches. In West Asheville, Nancy Hyton, founder of the Center for Holistic Medicine, has cataloged more than 60 medicinal and edible plants in the neighborhood. “Going on a plant walk is an excellent way to open your eyes to the bounty that the plant world has to offer us and can change the way you think about weeds forever,” Hyton told Mountain Xpress.

Edibles abound in Wisconsin’s funky college town and capital, with fruit and nut trees found in almost every part of the city—from blueberries in Blackhawk Country Club to walnuts in Hoyt Park. Supporting the planting and preservation of these urban edibles is Madison Fruits and Nuts, a group working to get free food in even more public places. The group’s efforts got a boost last year when the Madison City Council passed amendments to the city’s general law authorizing edible landscaping on city-owned land.

Given its deserved reputation as one of the nation’s most innovative food cities—the restaurants here even serve insects—it’s no surprise that San Francisco offers plenty of wild edibles for visitors and residents to enjoy. No fewer than 25 urban orchardsacross the city yield fruit, and efforts are under way by the city and Friends of the Urban Forest to plant hundreds more. Forage SF offers two-hour Wild Food Walks that point out the delicious treats most San Franciscans typically walk right past. These include salal, thimbleberry, plums, pomegranates, rose hips, and even olives.


TakePart is the digital news and lifestyle magazine from Participant Media, the company behind such acclaimed documentaries as CITIZENFOUR, An Inconvenient Truth and Food, Inc. and feature films including Lincoln and Spotlight.

« US House Democrats IMPEACH President Donald Trump, case now goes to US Senate (Previous News)
(Next News) Wikipedia’s Article of the Day December 19, 2019: It Is the Law »

Trump ally Roger Stone sentenced to over 3 years in prison