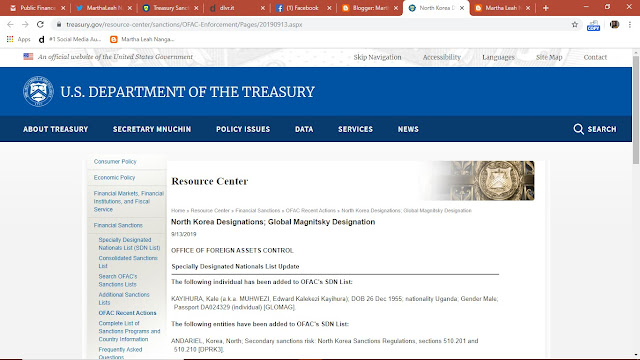 U.S. DEPARTMENT OF THE TREASURY

Washington – Today, the U.S. Department of the Treasury’s Office of Foreign Assets Control (OFAC) sanctioned the former Inspector General of Police (IGP) of the Ugandan Police Force (UPF), Kale Kayihura (Kayihura), pursuant to Executive Order (E.O.) 13818, for having been a leader or official of an entity that has engaged in or whose members have engaged in serious human rights abuse against Ugandan citizens, as well as for his involvement in corruption. This action complements the Department of State’s concurrent implementation of a visa ban for Kayihura under section 7031(c) of the Fiscal Year 2019 Department of State, Foreign Operations, and Related Programs Appropriations Act (P .L. 116-6) due to Kayihura’s involvement in gross violations of human rights.

“We are targeting Uganda’s former Police Inspector General Kale Kayihura for using corruption and bribery to strengthen his political position, as units under his command committed serious human rights abuses,” said Sigal Mandelker, Treasury Under Secretary for Terrorism and Financial Intelligence. “The U.S. government is committed to leveraging our human rights and corruption authorities to target, disrupt, and counter those who engage in abuse and corruption around the world.”

As a result of today’s action, all property and interests in property of Kayihura, and of any entities that are owned, directly or indirectly, 50 percent or more by him alone or with other designated persons, that are in the United States or in the possession or control of U.S. persons, are blocked and must be reported to OFAC. OFAC’s regulations generally prohibit all transactions by U.S. persons or within (or transiting) the United States that involve any property or interests in property of designated or otherwise blocked persons.

Kayihura is being designated for being the leader of an entity that has engaged in or whose members have engaged in serious human rights abuse and being a current or former government official who is responsible for or complicit in, or has directly or indirectly engaged in, corruption.

As the IGP for the UPF, Kayihura led individuals from the UPF’s Flying Squad Unit, which has engaged in the inhumane treatment of detainees at the Nalufenya Special Investigations Center (NSIC). Flying Squad Unit members reportedly used sticks and rifle butts to abuse NSIC detainees, and officers at NSIC are accused of having beaten one of the detainees with blunt instruments to the point that he lost consciousness. Detainees also reported that after being subjected to the abuse they were offered significant sums of money if they confessed to their involvement in a crime.

In addition, Kayihura has engaged in numerous acts of corruption, including using bribery to strengthen his political position within the Government of Uganda, stealing funds intended for official Ugandan government business, and using another government employee to smuggle illicit goods, including drugs, gold, and wildlife, out of Uganda.

Building upon the Global Magnitsky Human Rights Accountability Act of 2016, on December 20, 2017, the President signed E.O. 13818, in which the President found that the prevalence of human rights abuse and corruption which have their source, in whole or in part, outside the United States, had reached such scope and gravity that they threaten the stability of international political and economic systems. Human rights abuse and corruption undermine the values that form an essential foundation of stable, secure, and functioning societies; have devastating impacts on individuals; weaken democratic institutions; degrade the rule of law; perpetuate violent conflicts; facilitate the activities of dangerous persons; and undermine economic markets. The United States seeks to impose tangible and significant consequences on those who commit serious human rights abuse or engage in corruption, as well as to protect the financial system of the United States from abuse by these same persons.

To date, OFAC has designated 114 individuals and entities under E.O. 13818. This figure is in addition to the numerous human rights or corruption related designations Treasury has issued under various other authorities. In total, since January of 2017, Treasury has taken action against more than 680 individuals and entities engaged in activities with links to human rights abuse and/or corruption.

Information on the individuals and entities designated today.
SECTION 703L(C) OF THE FY 2019 DEPARTMENT OF STATE, FOREIGN OPERATIONS, AND RELATED PROGRAMS APPROPRIATION777

Section 7031 ( c) provides that, in cases where the Secretary of State has credible information that foreign officials have been involved in significant corruption or a gross violation of human rights, those individuals and their immediate family members are ineligible for entry into the United States. More information on the 703 l(c) designation.