The US carpet-bombed an island which it said was “infested” by Daesh fighters in Iraq.

Video footage released by the US air force shows the small island of Qanus, in the Salahdin province, hit by nearly 40 tonnes of bombs in quick succession.

Tuesday’s strikes were an effort to destroy a “major transit hub” used by Daesh to get into the country’s northern capital, Mosul.

Iraqi ground forces raided the area after the air strikes were comepleted.

At the behest of the Iraqi government, the Iraqi Counterterrorism Forces, @CJTFOIR, and AFCENT strike ISIS in Salah al-Din province, Iraq, this morning. The coalition continues to be committed to destroying ISIS remnants. 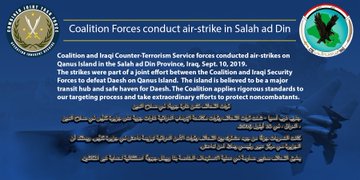 In a statement the US-led coalition said: “We’re denying them the ability to hide on Qanus Island. We’re setting the conditions for our partner forces to continue bringing stability to the region.”

Though Iraq declared victory over Daesh in December 2017 after its forces recaptured the last areas still under the terrorist group’s control along the border with Syria, sleeper cells continue to operate.

Daesh affiliates have carried out attacks across the country, with security officials in the US warning that the group my regroup and gain control of parts of the country once again.

« US bombs ‘Isis‑infested island’ I Times News (Previous News)
(Next News) Your cat isn’t plotting to kill you, probably (PHOTOS) »