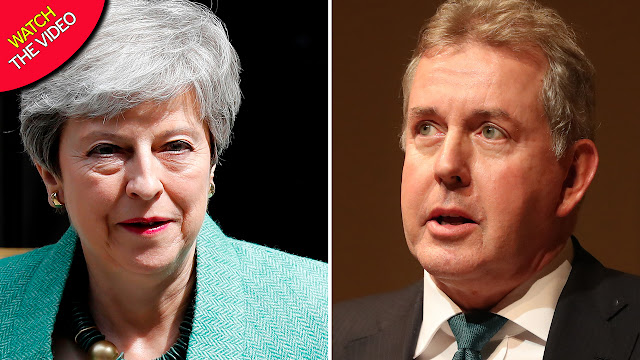 LONDON (Reuters) – Prime Minister Theresa May said she regretted that Britain’s ambassador to the United States had felt the need to resign, adding that officials needed to be able to give “full and frank advice”.

Kim Darroch resigned on Wednesday after Donald Trump labelled him “stupid” and “wacky” following the release of confidential memos from the envoy in which he branded the U.S. president’s administration inept.

“This morning I have spoken to Sir Kim Darroch. I have told him that it is a matter of great regret that he has felt it necessary to leave his position,” May told parliament.
===


British ambassador to Washington quits after spat over leaked memos

LONDON (Reuters) – Britain’s ambassador to Washington resigned on Wednesday after Donald Trump labeled him “stupid” and “wacky” following the release of confidential memos from the envoy in which he branded the U.S. president’s administration inept.

Memos from Kim Darroch were leaked to a British Sunday newspaper, infuriating Trump who lunched a stinging Twitter attack on both the envoy and British Prime Minister Theresa May who had given him her full support.

“Since the leak of official documents from this Embassy there has been a great deal of speculation surrounding my position and the duration of my remaining term as ambassador,” Darroch wrote in his resignation letter.

“I want to put an end to that speculation,” he added. “The current situation is making it impossible for me to carry out my role as I would like.”

May told parliament after the resignation was announced that she had spoken to Darroch, who was due to leave his post anyway at the end of the year.

“I have told him it is a matter of great regret that he has felt it necessary to leave his position as ambassador to Washington,” she said.

Did you find apk for android? You can find new Free Android Games and apps.
Sharing is caring:
US, uk, world news, Leaked Cables, Trump Administration US, World News Comments Off on UK PM May says she regrets resignation of ambassador to United States Print this News

U.S.-Canada border could remain closed until next year unless ‘something miraculous’ happens: doctor