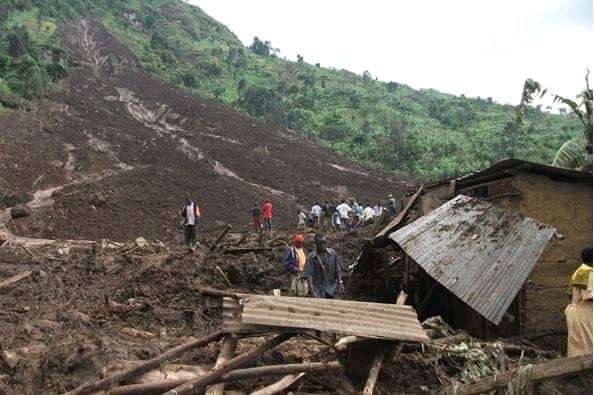 MARTHA LEAH NANGALAMA – In 2010, Bududa experienced landslides which left more than 100 of my people dead.

In 2012, Bududa experienced landslides which left more than 400 of my people dead. Schools and a health centre were buried. The regime asked for donations. Many people donated. All the money was stolen by Muchebeni’s regime.

The regime said in 2010 that all affected families were going to be resettled in Kigezi which has the same fertile soils as Mt. Elgon. Each family was gonna get a three bedroom house and 3 acres of land to grow food. My people ended up in an IDP camp living in taupauline (sp) tents on one meal a day.

Later, my people demanded to return to Bududa. The then Prime Minister JPAM met with them. He gave them one tampeco of beans and one tampeco of maize for them to go plant. He put them on buses to Mbale.

The Office of the Prime Minister (OPM) is now globally known for stealing disaster and refugee funds.

Ugandans should ask themselves why Polo’s regime has never put in place a permanent solution for Bugisu.

Below is an old article from THE GUARDIAN about Bududa Landslides. I am your memory keeper
====

7 years old story by THE GUARDIAN

The disaster preparedness minister, Stephen Mallinga, said it was still too early to say how many had been killed in Monday afternoon’s landslides, but officials from Bududa said the final death toll would probably be in the hundreds.

“We are sending a rescue team down there,” Mallinga said. “It’s very difficult to estimate how many have been killed, but two villages are affected, and maybe more.”

Witnesses said the landslides were unexpected, happening several hours after a torrential overnight downpour that at first seemed to have done little damage.

David Wakikona, a lawmaker from the region, said most people were likely to have been indoors when huge blocks of mud and rocks started to roll down hills, toppling homes, killing livestock and burying people alive.

“We don’t yet understand how this all happened, but it’s terrible,” Wakikona said. “Three villages have been buried.”

According to Wakikona, at least 300 people lived in the affected villages. Officials said rescue teams from the Ugandan army would play a lead role in moving the soil as the search for survivors began.

The Uganda Red Cross said two villages had been destroyed and at least 15 houses had been buried in the landslides.

Landslides are a common occurrence in the hilly parts of eastern Uganda, and they have been especially lethal over the years in those villages where the land is denuded of vegetation cover. In 2010, massive landslides in Bududa killed about 100 people, destroying buildings including the village market and a church.

The Ugandan president, Yoweri Museveni, who visited the scene, said at the time that the landslides were divine retribution for the people’s failure to give to the land what they take from it. The villages are usually heavily populated, and often situated on land bare of trees.

There has been fierce resistance to a government effort to relocate the most vulnerable people in Bududa and neighbouring districts, with activists saying it would be even more disastrous for villagers to abandon their ancestral homes. Even those who were relocated to a camp for refugees after the 2010 landslides secretly returned to Bududa, said Mallinga, the disaster preparedness minister.

“There’s a degree of unwillingness to leave,” he said.