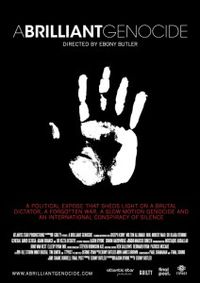 A Brilliant Genocide is a documentary by Atlantic Star Productions. Directed by Ebony Butler

A Brilliant Genocide is a 2016 documentary film produced by Atlantic Star Productions. The purpose of the film is to reveal atrocities committed against the Acholi people by the Government of Uganda, and its President Yoweri Museveni, under the guise of crushing a rebellion by Joseph Kony’s Lord’s Resistance Army (LRA). The film is a counterpoint to the 2012 documentary short film Kony 2012. It was directed by Ebony Butler.

It’s brings an insight of the forgotten war, that turned out to be one of the most neglected human crisis of the modern times as described by Jan Egland.

The film brings out a dimension and perspective that has not always been with most of the film’s that have entirely relied on official discourses.

===
MLN – You can watch the movie online for free. I provided the link. I also have the MP4 on my Google drive and this is the link: https://ift.tt/3owwORP

« Wikipedia article of the day for October 29, 2020 Portrait of Mariana of Austria (Previous News)
(Next News) A Brilliant Genocide »