Uganda’s @HeBobiWine retained @robertamsterdam as a lawyer – Some information about Mr. Amsterdam 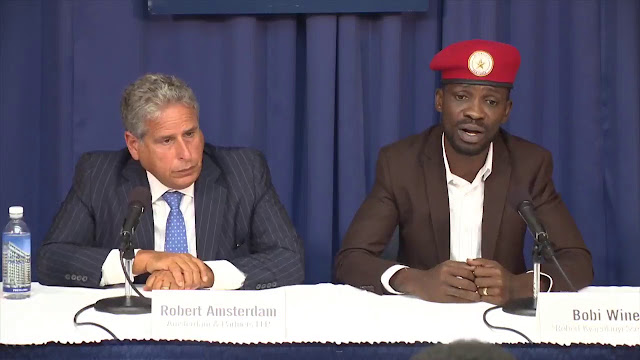 From Wikipedia, the free encyclopedia https://ift.tt/2P59Y15

Robert “Bob”[1][2][3][4] Amsterdam (born 1956) is a Canadian international lawyer of the law firm Amsterdam & Partners, with offices in Washington, D.C. and London.

This section of a biography of a living person does not include any references or sources. Please help by adding reliable sources. Contentious material about living people that is unsourced or poorly sourced must be removed immediately.

Amsterdam was born in 1956 in White Plains, New York, and moved to Ottawa, Ontario, Canada at a young age where he grew up as a Canadian citizen.

Amsterdam was awarded a B.A. from Carleton University (Ottawa, Canada) in 1975 and a LL.B. from Queen’s University (Kingston, Canada) in 1978. Amsterdam is currently based in London, United Kingdom, while the firm continues to maintain an office in Washington DC.

Amsterdam was admitted to the Canadian Bar in 1980 and he is also admitted as a solicitor in London, United Kingdom.

Some of Amsterdam’s most well known cases were related to early work in Africa and Latin America (well before his later Russia-related issues). Amsterdam won a major international litigation on behalf of the Four Seasons Hotel and Resort Group in Venezuela, and he also worked the well known Gutierrez case in Guatemala, which involved representing the victims of one of the country’s largest alleged tax fraud and money laundering schemes.[5][6] Amsterdam would go on to represent famous political prisoners such as Eligio Cedeño in Venezuela, African political leaders such as Nigeria’s Nasir Ahmad el-Rufai, and leading democracy advocates such as Singapore’s Dr. Chee Soon Juan.[7][8]

In 2005, Khodorkovsky was sentenced to eight years in jail. On the night of the verdict, Amsterdam was accosted by plainclothes security agents in the middle of the night at his hotel room, who attempted to arrest him before he could call his colleagues in the media.[9] In the years since leaving Russia, Amsterdam engaged in a media campaign for the Yukos Group-MENATEP and Khodorkovsky cases.[10]

In March 2009, Khodorkovsky appeared in court for a second trial for fraud and tax evasion. Though Amsterdam cannot represent Khodorkovsky in Russia (no foreigner can argue before a Russian court, and the Federation refused to issue a visa), he still represents Khodorkovsky on the international stage.[citation needed]

Robert Amsterdam was hired in May 2010 by former Thai Prime Minister Thaksin Shinawatra to serve as international lawyer and adviser to the defence counsel of the “Red Shirts,” formal name the United Front for Democracy Against Dictatorship (UDD).[11]

In 2010, Robert Amsterdam “urged the international community not to tolerate the government’s violent crackdown on self-proclaimed peaceful protesters,”[12] and published a list of alleged human rights and international law violations committed during what he called the “Bangkok massacres”.[13]

During the 2013–14 Thai political crisis, Amsterdam delivered a speech to a massive Red Shirt rally in Bangkok. Former Democrat Party member and anti-government protest leader Suthep Thaugsuban criticized Amsterdam for it, to which Amsterdam responded naming Suthep as a Thai Taliban.[14]

He is now part of the legal team representing Kim Dotcom, the Internet entrepreneur in the Megaupload legal case.[15]

Robert Amsterdam and his company cooperate with the Turkish Government against the Gülen movement.[16]