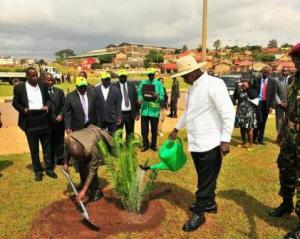 For Ugandans so loved Museveni, Ugandans wanted another rap.

They are enjoying a 40 trillion budget
in anticipation of his gifting tours.
Their Opposition is worse than Museveni’s subterfuge, sabotage and armed rebellion since 1970.
They host refugees for profit, security and insecurity.

When they want to celebrate Universal Primary Education, they fail urban pupils.
Ugandans commit murder before city lights.
They offer jobs for rape in Arab lands. They also sell jobs for marks and promotion.

Ugandans would love to auction the Murchison falls.
And they do love their water dirty green in the Murchison bay.
Ugandans sell their wetlands for votes.
Their clergy are for hire.
Their Uganda is mortgaged.
And if the street cameras ever caught 1000 murders,

Ugandans would swear they never saw the pictures.
Surely if Ugandans did not love Museveni,

Why would they repeatedly vote him ?
You want another rap?

Did you find apk for android? You can find new Free Android Games and apps.
Sharing is caring:
museveni, UGANDA, Opinion Uganda, Museveni, Opinion Comments Off on Ugandans love Museveni Print this News