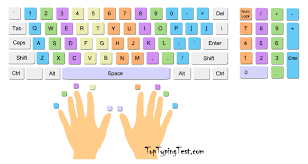 One of the most assumed skills these days is that a job applicant knows how to type. Not with 2 fingers but with 10 fingers.  Below is an article about typing. I can tell when talking to someone on the phone as they are filling in forms online that they are typing with 2 fingers.  If you learn to speed type, you will save yourself a lot of time.  You will also save your employer money.

Touch typing is the ability to use muscle memory to find keys fast, without using the sense of sight, and with all the available fingers, just like piano players do. It significantly improves typing speed and eliminates errors. Touch typing simply makes you more productive and it is a skill worth learning. However, many people engage in the bad habit of ‘hunt-and-peck’ typing, even those seasoned professionals with years and decades of computer experience. It is easy to understand, though, as touch typing requires dedicated practice to learn it well.

That is why we created Keybr.com, a free online typing tutorial, to give you the most advanced learning experience and let you develop your typing skills faster.
How Does This Typing Tutor Work?

There are several features in Keybr.com that set it apart from most of the typing practice software out there. In short, it employs statistics and smart algorithms to automatically generate typing lessons matching your skills. Lets discuss this in details.

First, it does not force you to repeat the same characters over and over again; that is simply slow, boring and contributes very little to your learning. For example, the words like ‘jjf jjk jdd …’ are very unnatural, hard to read and will slow down noticeably even experienced typists.

Instead, Keybr.com generates random, but readable and pronounceable words using the phonetic rules of your native language. These words look almost natural, and often they really are. Typing sensible text is much easier than repeating random letters, and it helps you to remember frequent key combinations. The latest point is very important. For example, it’s almost impossible for the letter ‘W’ to follow the ‘Z’ in English, and you will never type this combination in Keybr.com. Instead, you will type more common words, such as «the,» «that,» «with,» and so on. And soon you will learn how to type the «th» combo really fast.

Second, Keybr.com measures your keystroke dynamics and collects comprehensive typing statistics. For example, it measures your typing speed for each individual key, and uses this data to generate random words putting emphasis on the weakest key. The more troubles you have with a particular key, the more you will be typing it. It means, the generating algorithm will put that letter in every word in the next generated lesson. Your typing skills are re-evaluated after every completed lesson, and the next lesson will be adjusted accordingly.

Third, Keybr.com lets you introduce as few keys as possible to the lesson, adding more keys automatically when it decides that you are proficient at the current level. When you only start learning it generates lessons with words from a very small alphabet of the most frequent letters. When your typing speed for every key in that alphabet reaches certain threshold, the algorithm adds the next most frequent letter to the alphabet. And so on, until the next letter. This way you will learn the most frequent letters first, and the least frequent ones later.
Is It Really Effective?

We selected a few example profiles to show you how people advance in learning touch typing when using Keybr.com. These are real, anonymized user profiles. Hopefully they will inspire you to keep learning!

« UGANDA: Youth, please learn how to type!!! (Previous News)
(Next News) ‘This is hell’: Zimbabweans say economy is worse than ever »