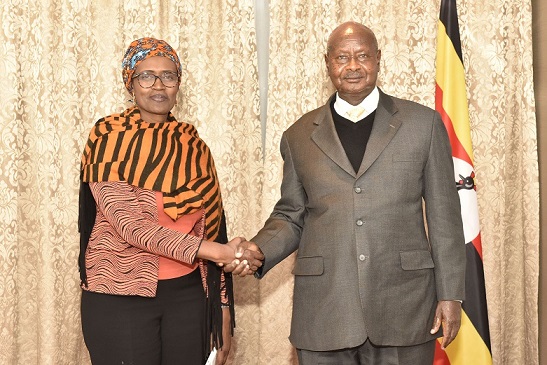 Byanyima’s Emotional E-mail: Why I am Leaving Oxfam to Join UNAIDS

In an email to staff, Byanyima today said she had been “asked by UNAIDS to become its new Executive Director and have accepted the job.”

She said she took up the job due to her passion to confront the AIDS scourge.

Byanyima also revealed her brother, Bernard had succumbed to HIV hence the motivation to play a global role in combating the disease.

Below is Byanyima‘ emotional email to Oxfam staff in full:

I’ve been asked today by UNAIDS to become its new Executive Director and have accepted the job. As I shared with you before, a number of women’s rights activists, human rights activists and people living with HIV/AIDS encouraged me most strongly to apply and lead the global effort at the UN to fight HIV/AIDS.
Loading…

I have very personal reasons for doing so. I lost my brother Bernard to AIDS as well as many comrades, friends and relatives.

I’m guardian to children who are HIV/AIDS orphans. Like most other Ugandans, HIV/AIDS has been part of my life and ending it is an extremely important social justice issue, particularly so in Africa where the epidemic is most experienced. I am greatly honoured to be selected to lead UNAIDS.

I feel torn at the idea of leaving Oxfam. I’ve been so honoured to lead Oxfam over the last seven years.

You are the most brilliant and passionate activists that I have ever known. I’ve learnt so much and enjoyed great successes and wonderful experiences with you all … as well as some tough challenges, as you well know! But we have stood together to emerge from crisis to recovery, progressing steadily toward realizing the potential – as the Independent Commission said – of becoming a leading voice in the sector.

I want to make the transition to my successor as smooth as possible and will work closely with the Boards to this end.

I will remain in my role as your ED for the next few months and focus on moving forward some key priorities for Oxfam.

I am informing you, my colleagues, of this news today as soon as I was told myself, and before UNAIDS is due to make its public announcement later today; so there is a degree of confidentiality in this note until that announcement, but I did want you all to know first.

The strategic planning process and the governance review are critical paths taking Oxfam into the future.

I intend to continue supporting and guiding these processes so that by March next year Oxfam will be in a strong position to make these key decisions.

I will also continue working with the Task Force and our safeguarding and culture teams to take forward the Independent and the UK Charity Commission recommendations, building a strong safeguarding architecture and positive work culture across Oxfam.

Oxfam remains a leader in global civil society and that has never been more important than today. It is strong and admired because of you – the staff and volunteers. You make Oxfam the place it is. I am confident that with your incredible spirit, togetherness and sense of belonging, Oxfam will become a better and safer place for all.

The world needs Oxfam and all other social justice activists! We’re seeing the ugliness of racism, misogyny, capitalist greed and violence raised around the world. We must fight harder and smarter to build the just world we believe in. We have no time to lose; I am fighting alongside you till my last day. Aluta continua.