UGANDA: Why the Maraga of Uganda dissented on #AgeLimitRuling 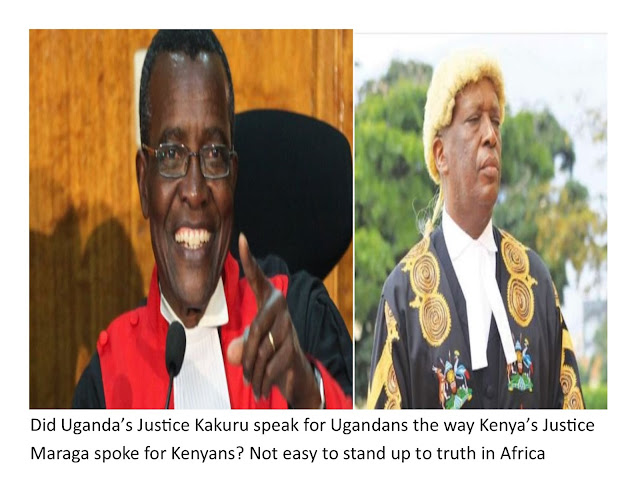 KAMPALA (DAILY MONITOR) – Justice Kenneth Kakuru was the only one of five judges of the Constitutional Court not to rule in favour of scrapping the age limit clause from the 1995 Constitution. The majority ruling now paves way for President Museveni to contest again at the next polls, if he so wishes.

Core to his dissent judgment on the issue of age limit, Justice Kakuru held that there was no public participation in the processes that led to the amendment of constitutional amendment Act No. 1 of 2018, which public participation was very key and without the same, invalidates the amendment.
The judge pointed out the caution raised by Speaker of Parliament Rebecca Kadaga, when MP Raphael Magyezi tabled his age limit motion before sending it to Legal and Parliamentary Affairs Committee for scrutiny, alerted the legislators on the need to seek the views of the public on the same process.
“I have discussed the relevance and importance of public participation in the constitutional process, specifically in respect of the Constitution Amendment. I have already stated that in my humble view, public participation is one of the basic structures of our Constitution. The public participation, therefore, cannot be wished away or taken lightly by Parliament,” held Justice Kakuru
He continued: “Parliament was certainly aware of this constitutional requirement when the Speaker herself on October 3, 2018, cautioned members of Parliament to comply with Articles 1 and 2 of the Constitution in the process of enacting the impugned Act.”
The judge goes on to quote the exact words of caution that Speaker Kadaga echoed to the MPs on the importance of seeking people’s views regarding the constitutional amendments.
“Honourable members, the Bill is sent to the Committee on the Legal and Parliamentary Affairs. However, I would like to remind you honourable members that this matter touches Article 1 and 2 of the Constitution; people must be involved in this deliberation,” Justice Kakuru quotes the words of the Speaker while cautioning the MPs

Parliament blamed
Justice Kakuru went further to fault Parliament for having only made public consultations for a period of two months, which in his view was a short period taking into account the more than 15 million registered voters, 290 constituencies, 112 districts, 1,403 sub-counties and 57,842 villages in the country.

“Parliamentary Affairs Committee report set out the list of the stakeholders it was able to consult. There are 22 individuals and eight government ministries, commission or agencies including Rt hon prime minister in official capacity. The rest appears to be a collection of obscure and amorphous groups that include Fronasa veterans, Uganda Association of Uneducated Persons, Kick All Age Limit Out of the Constitution and others,” he observed.
He added: “ With due respect to the members of the committee referred to above, for them to suggest that the above persons and groups are the stakeholders representing the whole people of Uganda as envisaged under Article 1 of the Constitution, in view of our past history, is unfortunate to say the least. I must state here that I have restrained myself from using a stronger language.”
In further faulting Parliament, Justice Kakuru, quoting statistics of the Electoral Commission, said the 22 people consulted during the constitutional making process, meant that its 0.0001375 per cent of the registered voters who were consulted, a number he said was very small to be a representation of the more than 15 million registered voters.
He added that even if all the 455 MPs were to be consulted and added on the 22 people who were consulted, still the percentage of the consulted people would still be far less.
The issue for determination was whether or not sections 3 and 7 of the impugned Act, which removed the 75 year age limit of the President and lowered age limit of the district chairpersons from 35 to 18, years was unconstitutional.

How other Judges ruled on age limit

Justice Remmy Kasule
In his analysis, Justice Kasule held that the framers of the 1995 Constitution, in their wisdom, saw it fit to have age limit of one to stand for President under the qualifications of President.
However, he was quick to state that the same framers did not put Article 102 among articles that have to be amended after first getting the approval of Ugandans through a referendum, hence there was no need to hold a referendum in order to scrap this provision from the Constitution.

He also cited the Odoki report that he said only proposed a minimum age limit of 40 years for one to contest for presidency and never put the maximum. “The above quotation clearly shows that the Odoki constitutional commission itself did not consider age limits on the President and other local government leaders as one of the structural pillars to be entrenched in the Constitution. The Constituent Assembly also adopted the same attitude, which has been shown above,” he held.

Justice Elizabeth Musoke
In her verdict, she stated that it’s possible that the removal of term limits, especially in the circumstances of Uganda, may encourage the incumbent president to want to stay on in power.
However, she was quick to hold that the power to decide who governs/rules them shall remain with the people who exercise it through regular general elections.


“The people’s power to elect a president or district chairpersons of their choice is not taken away by lifting the respective age limits. If anything, citizens would in my view be encouraged to aspire to elect leaders of their choice and actively participate in politics and elections,” she held.

“Age restrictions cannot be described as part of the values which are enshrined in our Constitution alongside a sacrosanct principle such as democratic governance. if it were, then they would have been entrenched just like other core values were,” he held.

Deputy CJ Alfonse Owiny-Dollo
In his reasoning, he held that since Parliament exercised power, which the people have conferred onto them under the provision of Article 2 of the Constitution, he was unable to fault it for the process it took to effect these amendments. “In addition to having been done pursuant to the provisions of the Constitution in that regard, the process through which they were amended fully complied with the Rules of Procedure of Parliament,” he held. “This being so, the two amendments have validly become part of the Constitution. In the event, I would answer Issue No.12 in the negative,” he held.

Did you find apk for android? You can find new Free Android Games and apps.
Sharing is caring:
politics, UGANDA Uganda, Politics Comments Off on UGANDA: Why the Maraga of Uganda dissented on #AgeLimitRuling Print this News