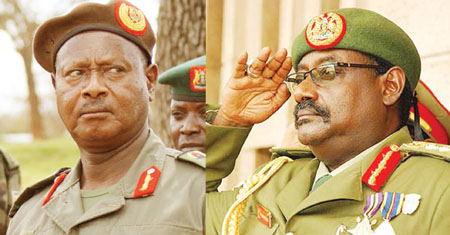 WHY GEN. SSEJUSA WAS STRUCK OFF THE RETIREMENT LIST

CHANGE OF GUARDS – Around October 2018, Museveni’s army announced plans to retire 17 of his top military Generals including the controversial Gen. Ssejusa. While the idea behind the retirement is to create room for the Muhoozi Project (succession of the presidency by his son, Gen. Muhoozi) and to second the retired army officers to government civilian positions, this website doubted the timing. We rightly argued that the early announcement was meant to dupe Gen. Ssejusa before predicting that by June 2019, Gen. Ssejusa’s name will have been struck out.

Indeed, the army has struck out Gen. Ssejusa’s name from the list of 17 Generals that are being retired. The army Spokesman gave this excuse;
“We are a very flexible institution and change is a factor of life. When those factors come in, we respond to them accordingly. At an appropriate time, he will be honourably retired by the institution of the UPDF,” Brig Karemire said.

Here below, we reproduce our October 2018 article that highlights the factors why Gen. Ssejusa can’t be retired.


Last week,  Museveni once again duped Ugandans by announcing that he intended to free 16 of his top army Generals from captivity. The date of July 2019 was set as the date when the said officers would be freed. Among those to be freed is the controversial hostage Gen. David Ssejusa. The army Spokesman confirmed the development thus;
“I can confirm that Gen Sejusa is one of those who are going to retire next year. It’s our usual retirement, well-laid out retirement schedule for every officer. The retirement is based on age, rank and years of service.”

From the above list, it is only three Brigadiers (Kyamulesire, Sabiiti, and Kakuru) who can be said to be in some semblance of active military service. All the rest were rendered inactive over a decade ago. Though aged, Museveni could not set them free owing to fear that they would follow follow the trend by joining opposition politics. At the same time he could not retain them in active military service because he has been creating an officer corps that is loyal to his son, Gen. Muhoozi who is his potential successor.

While Generals Turyagyenda, Byarugaba and Kyamulesiire served the Uganda Army (UA) under Iddi Amin; Wacha and Kakuru served under UNLA under Milton Obote, all the remaining started their military careers with Museveni army. It is only Eng. Sabiiti Mutebile (brother to the Bank of Uganda Governor, Tumsiime Mutebile) who joined the army around 1987. Generals Waswa Balikalege, J.B Mulindwa, Kibirango and Ssewankambo are among the reminants of the Bush War Baganda army officers who have for some time been systematically phased out.

To grasp a clear understanding of why we are reproducing a related narrative here below;
Saturday, July 7, 2018
at 12:38 PM

MUSEVENI FREES IDDI AMIN “USELESS” GENERALS FROM CAPTIVITY
Last week Ugandans witnessed their military dictator, Gen. Museveni setting free a number of harmless, aged and useless so called army Generals from captivity. These are army officers who joined the army in the early 1960s and 1970s and served under different regimes, fought and lost battles, were captured and taken hostage, fled into exile, formed and served rebel groups before Museveni finally captured and held them captive.

Under Museveni they initially held some responsible positions under watch during the broadbased era. However as his real intentions came to the surface, he sidelined these officers and left them redundant for decades. During this period they suffered terrible humiliation as their former aides, drivers, shamba boys, escorts, clerks and neighbour’s children rose to become their Boses. It is in this regard that while appearing on NBS Television Morning Breeze program around January 2017, Gen. Kasirye Gwanga commented; “I would rather retire, but I can’t salute these young chaps”. He was referring to the appointment of Gen. Muhoozi Rubakuuba as the army chief.

These Generals initially shunned joining Museveni during his Bush War because as the Minister of Defence during the post Iddi Amin UNLF era, he had been responsible for their degrading treatment, humiliation, detention without trial in appallingly conditions. The likes of Hussein Adda. Mark Kodil and Kasirye Gwanga joined Kayiira’s UFM. During the Nairobi Peace Talks in 1985, Mark Kodil was in the Lutwa government delegation. John Mateeka is hated by RPF in Rwanda because he refused to invade with them in 1990.

For over the last one decade these Generals have been a nuisance in the army. Museveni feared to free them for fear that they would join the opposition as is the trend for retired army officers. That is why the likes of Gen. Ssejusa can’t be released. For the same reasons, there are many others of that kind who are still stuck in there. Otherwise, let the army tell Ugandans (who have been bearing the burden of maintaining these Generals) what contributions they have been making for at least the last one decade.

As the Muhoozi Project takes shape, Museveni now feels safer to set free these now powerless senior army officers. However, he is very cautious and the process takes a rigorous process of establishing the so called ” political clarity” of the potential retirees. His UPDF Act (2005) talks about the grounds for retirement as old age, ill health, disability, indiscipline, and incompetence. To suit his designs, the same Act is silent on the retirement age.

The 11th is Jacob Musajjawaza who did not serve in any other army other than the NRA which he joined in 1981 as a civilian. At the time of joining, he was known to be not only a rich man but the richest among all the NRAs including Museveni who almost had nothing. Jacob committed his personal resources towards the cause of the war but interestingly he is not among the known thieves who amassed a lot of wealth upon coming into power. This is inspite of the fact that he initially held juicy positions like Director of Supplies.

Museveni will not take chances with these Generals. We are likely to see a number of them appointed to civilian positions in government, in a wider scheme of militarization. The impending revival of Uganda Airlines may be the first casualty. The sad news is that almost all the retired Generals are politically hopeless and have been unconsciously enjoying the captivity. Remember, this is the second time Kasirye Gwanga is retired. The first time was in May 2015 but shortly after he complained of hard life and was reinstated to do nothing but just to burden the taxpayer.


INFORMATION IS POWER
======================
Therefore, other than for purposes of political expediency, there was no logic in the early announcement. The move was meant to counter the anticipated negative publicity that will be generated by Gen. Mugisha Muntu’s (Retired) formal launching of a new opposition political party next month.
Having been Museveni’s former army chief, his launching of a political party to wrestle power from his former boss will automatically generate a lot of international scrutiny of Museveni’s management of the military thus the question of hostage Generals.

On the other hand, the announcement is part of the guarantees of the secret deal that was struck between Museveni and his controversial Gen. Ssejusa. The General who has repeatedly declared his loss of faith in the institution of the military has been subjected to immense persecution. The deal involved his disassociation with the opposition and refraining from public political statements in return for being freed from the military captivity. By making a public announcement almost a year in advance, Museveni is trying to dupe and contain the pressure from Gen. Ssejusa.

Museveni who very much believes that Gen. Ssejusa’s freedom will obviously negatively impact the political terrain, is simply buying time and it won’t be surprising if he changes his mind; come July 2019.