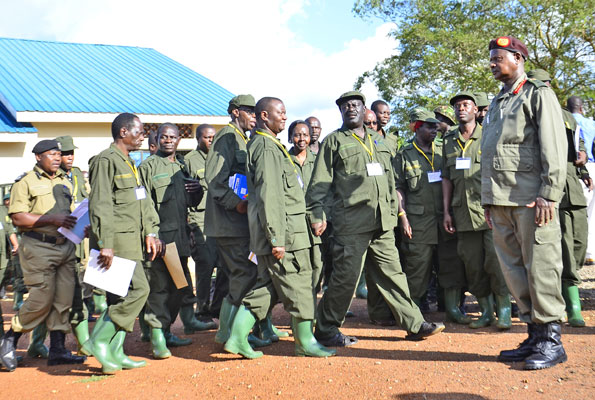 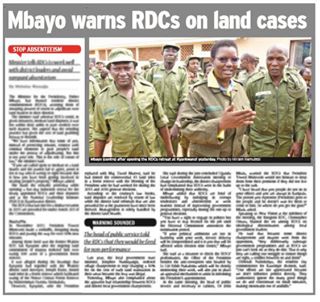 CHANGE OF GUARDS – With worsening a security situation under Museveni’s 33 years military dictatorship, it is prudent to make an insight into the security management hierarchy. Special focus is on the Resident District Commissioner (RDC) as the Head of Security at the district level.

The British colonial administration appointed a District Commissioner (DC) as the central government representative at the district level. The system continued after independence through all the successive governments. When Museveni took power in 1986, he abolished the position of the DC. He instead appointed a Special District Administrator (SDA) then changed it to District Administrator (DA) and later to Central Government Representative (CGR). The 1995 Constitution created the position of Resident District Commissioner (RDC) and his Deputy and Assistant as senior civil servants appointed by the President to head districts.

The 1997 Local Government Act stipulates the administrative position of the RDC with no mention of being the Head of the District Security Committee. In 2000, Museveni enacted the National Security Council Act that creates the National Security Council (NSC) chaired by the President. The NSC whose major function is to coordinate and advise on policy with regard to national intelligence and security, is composed of the President, Vice President, Minister of Internal Affairs, Minister of Finance, Attorney General, Minister of Foreign Affairs, Minister of Security, Minister of Defense and any other person appointed by the President. Its Ex officials are the IGP, the Army Commander, the DG-ISO, the DG-ESO, CMI, Director of Special Branch, Director of CID, and the Commissioner of Prisons. The Joint Intelligence Committee (JIC) is the technical committee of the NSC.

From its inception, the NSC and its JIC remained on paper. Instead, national security management and policy formulation is solely in the hands of Museveni assisted by his brother (Gen. Saleh), his crown prince (Gen. Muhoozi) and a few home boys in uniform in his bedroom NSC. At the district level, there is nothing like a District Security Committee. The Joint Intelligence Committee (JIC) cannot operate in a situation where Museveni is enjoying the suspicion, disharmony and competition amongst the different intelligence outfits over attention and resources. The same disharmony at the top trickles down the ladder to the district, sub county, parish and village level.

The sole mandate of the office of the RDC is to use the guise of state security to suppress dissent, inculcate a defacto one party ideology, harass and curtail the freedom of opposition activists ensuring selective service delivery, fomenting violence as a way of rigging elections, coordination of theft of public resources, to facilitate land grabbing by regime cohorts, to victimize and undermine the political and economic prospects of those perceived to be holding divergent political views. Unlike the traditional DC who was a person of tested experience and distinguished integrity, the RDC is handpicked and appointed by Museveni and in most cases as a way of providing both reward and bribery in form of employment. In some cases, the RDC is some cadre who lost in elective politics or was coerced to give way to a more preferred regime candidate for an elective position. They lack the slightest qualification of being at the helm of the district intelligence and security management. What they call intelligence in their docket is nothing but reports of peaceful political dissent.

The administrative hierarchy and line of reporting the so-called intelligence information is vague. Though their administrative cost is by statute supposed to be from the Consolidated Fund, they often get financed from the district administration accounts that they are mandated to supervise and audit. During the early years of Museveni’s communist military dictatorship, the office fell under the NRM Secretariat and was answerable to the National Political Commissar. Following the introduction of the so-called multiparty system, the office now falls under the President’s office. They are structurally answerable to the Minister for the Presidency.  However, Museveni’s redundant Minister of Security, Gen. Tumwine has been unsuccessfully attempting to impose his authority on RDCs.

In November 2018, the Security Minister directed all RDCs and DISOs to submit to his office daily Security Situation Reports (STREPS). However, in February 2018, he was lamenting;
“There are those (RDCs) who did not send anything in the month of December, 2018 and January 2019, like Kabarole and Kamwenge, while others are fond of sending, Nothing To Report (NTP)…..I do not believe that there can be nothing to report about a whole district. I ask those sending the Streps to keep up the vigilance and I will not hesitate to take appropriate measures on those defaulting.”


Mr Asiimwe Stephen, the Kabarole RDC, told the press that he neither reports to Daily Monitor nor the Security ministry;
” I report to the Minister for Presidency. Call them and ask whether I have been reporting or not. The minister for security is less concerned and neither is Daily Monitor.”

There has been persistent blatant violation of human rights by the office of the RDC. Some RDCs have been agitating for being granted more powers to arbitrarily send into detention political dissenters. The murderous Mukono RDC, Fred Bamwine has been at the forefront of this agitation. This is the same Bamwine who as RDC of Rubaga Division a few years ago ordered his bodyguards to shoot into the leader of opposition before injuring and maiming scores. Around mid August 2019, the Jinja District RDC, Eric Sakwa decreed that suspected motorcycle thieves should simply be killed;
“We are tired of thieves stealing and killing BodaBodas. Whoever is caught should be shot dead. We shall perform an autopsy after we have killed them.”

During a public meeting in 2009, the then RDC of Kabarole District, Mr. Kakonge Kambarage ordered the District Veterinary Officer to kneel down for hours just because his phone had rung during the meeting.
The same Kambarage, while RDC in Kabarole in 2008 with full force of armed military police officers evicted a one Kiiza and his workers and manhandled them at gunpoint to evict him from the plot of land.


Justice Owinyi Dollo scoffed at Mr Kambarage’s attempt to cloth his action as “being within the powers of the executive arm of government for security reasons among others”.
Justice Owinyi-Dollo said Kakonge’s actions were “a blatant disregard of the rule of law, and a dangerous streak of utter impunity”.
He added: “I am compelled to condemn him to personally pay punitive damages to the applicant in the sum of Shs3, 000, 000.”
In both incidents the RDC was sued and court ruled against him to pay compensation but obviously the regime protected him by being promoted to his current position of Commissioner for the communist Patriotism Clubs.

The list of maladministration, irregularities, mismanagement and atrocities by Museveni’s RDCs is endless. It is anticipated that the situation will worsen after Museveni will unveil his Regional Resident Commissioners scheme. From the aforegoing it can be argued that the RDC is not the head of security at the district level but a mere regime agent of repression. By posturing to preside over sate security, the RDC is seeking a cover for his evil deeds.