UGANDA: Unemployed youth need to think out of the box 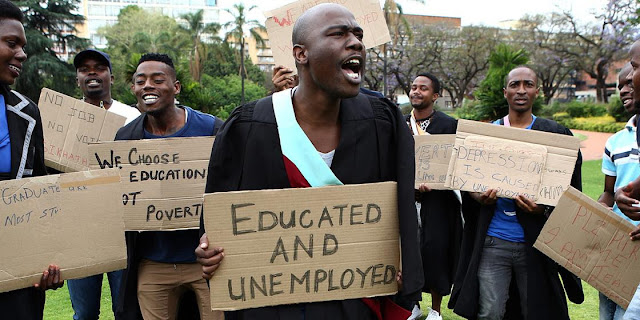 I met this young gentleman 2 years ago. I had no idea what he had to offer.

His first article about Uganda blew me away.  His second one was even more fantastico…. I was yelling ”which UPE did this kid go to”.

After over a year without communicating, I had an urgent need. Actually, it was neither urgent for him nor I but something that we could use.

Some Genius (one of them Twitter Influencers) had tagged me on a tweet of a child (young girl slave) dead body being flown back to Uganda from the Middle East.  That thread was heavy. Very heavy.  Except, everyone on it was complaining. I was looking for a solution, what can we do.  But apparently, everything wrong with Uganda is because of Museveni.  Does Museveni even live in Oman.

To cut the story short (soti), I commented on the thread that the originator should take all the contact information for every embassy in Uganda as well as all the embassies of Uganda globally as well as the official parliament information for each country in which there are Ugandan embassies.  Just one Excel spreadsheet then we can use that spreadsheet to send out communication to alert about our situation.

Imagine my shock.  Dude who had started the thread tells me … we are not the govt.  That is the govt job.  THEN adds, what do emails even do and they are mostly spam.

As if I had not been abused enough yet, one of their INFLUENCERS with something like 50k followers (mostly Ugandan though) descends on me saying …. READING AND WRITING will never solve Uganda problems or chase away the dictator. NOW I WAS ANGAZI. Okay, I could try to explain but you just told me that reading is useless.

Ladies and Gentlemen, if you cannot read, then you cannot write.  AND failing reading and writing, then why complain about being sold into slavery. ONE WOULD think that such a thing is common sense.  That reading is fundamental to helping solve our problems.

My young friend spent about 20mins and prepared the file for me with all the embassy contact information and I paid him a cool $100 CAD. I look forward to what else he will be doing for me.  This kid is sort of a genius. He deserves the money because he gets things super fast.  It would take me 3,000 tweets with #UoT and their elk, most of who are illiterate by the way, to get what I got in one day.

It is not only that he pulled up all the contact information for all the embassies in a short time.  He also knew that I wanted to use the information in Publisher for mass emails of news letters.  He prepared a sample newsletter based on the information of the embassies he had pulled up and what was going on in Uganda. IN ONE DAY.  The rest of you are posting rubbish and complaining and really not doing anything fundamental to earn money.  Do you know what it feels like to work just one day (20mins, maximum 60mins) and get Sh. 265,000.  That is literally $100 CAD per hour.  I do not even earn that much.

UGANDA: Graduate, What Is Next? – Your online profile