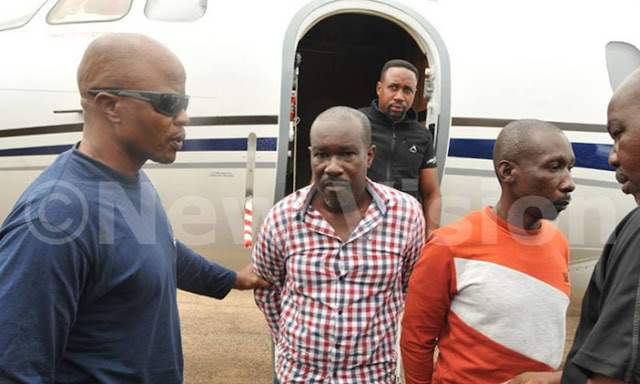 CHANGE OF GUARDS – On the 23 December 2012, Kipoi who was a Member of Parliament representing Bubulo West constituency was arrested on allegations of treason and detained in various places. On 22/07/13 he, together with six soldiers of the UPDF was arraigned before the High Court of Uganda and indicted with the offence of Treason. It was alleged that the accused persons (Kipoi & group) committed the offences between 2011 and 2012 in diverse places in Uganda specifically in Kampala, Mpigi, Luwero Entebbe, Fort Portal, Mbale Masaka and Nakasongora districts, that aimed at overthrowing the government of Uganda. The suspects reportedly organized meetings, mobilized funds; acquired firearms and military training in the Eastern Democratic Republic of Congo also mobilized and recruited people into their rank and file.

He pleaded not guilty and was remanded to Luzira upper prison.

Around August 2013, Kipoi was granted bail by the High Court of Uganda. Around the months of September 2013, fearing for his life, he fled to the DRC where he sought and was granted Political asylum.

On 18 December 2013, the Director of Public Prosecutions (DPP) entered a Nolle Prosequi (withdrew charges). On 19 September 2014, basing on the said Nolle Prosequi, the High Court discharged the applicant. Surprisingly however, on the same Nolle Prosequi , the DPP irregularly directed that the applicant should be charged in the Court Martial.

From DRC, Kipoi had subsequently relocated to Botswana where he settled with his family. Around 3rd February 2018, he was arrested in Botswana and subsequently extradited back to Uganda. On 19 March 2018, the applicant was arraigned before the General Court Martial and irregularly Charged with the offence of “offences related to security c/s 130 (1)(f)of the UPDF Act”, whose particulars are based on similar and related facts to the offence for which a Nolle Prosequi had earlier been entered by the DPP. On the same day 19 March 2018, the applicant was remanded to Luzira Upper Prison but the Chairman General Court Martial subsequently, ordered for his transfer to Makindye Military Detention facility.

During one of the court appearances in November 2018 Kipoi protested the chairmanship of Gen. Gutti at the Court martial. Through his Lawyer, Maj. (Rtd) Ronald Iduli, Kipoi asked Gen. Gutti to “excuse himself from the trial on grounds that he is compromised and can’t take independent decisions.”

“I think you are mentally sick. It seems ever since you were retired from the Army you have been tired since then.”

However, Outside court, Iduli told journalists that he was surprised that Gen. Gutti who has never studied law has continued to intimidate and threaten him in court on legal matters.

Around December 2018 Kipoi’s Lawyers protested before the Amnesty Commission over alleged coercion of their client into applying for amnesty (pardon);

“We would like to categorically distance our client from the said amnesty application and any document which reaches your office purportedly coming from our client is either a forgery or an application made under duress.”

It had been alleged that Kipoi had been approached by Captain Charles Ssekayita, a defense lawyer in the Army General Court martial telling him that he must apply for amnesty as the only way to regain his freedom.

February 2019 the High Court rejected his bail application on grounds that;

“..for the High Court to grant bail to the petitioner, the matter must be before the same court or in a lower court under its jurisdiction”

In April 2019, Kipoi made a U-turn and applied for amnesty before pleading guilty to the charges in May 2019.

“Yes I was involved in the activities,” said Kipoi when probed by Lt General Gutti about his application for amnesty.

The Prosecutor who is from CMI noted that certain procedures have to be followed including consulting investigating officers before they reply to Kipoi’s request to the military court. As a result, Gen. Gutti adjourned court to May, 27th, 2019 to hear the response from prosecution.

On May 27th, the Prosecutor told court that he had not yet received feedback from the investigating officers. The Cout’s Defence Counsel argued that since the prosecution had not filed its response to the amnesty application filed by Kipoi, the suspects should be released on bail without sureties as it is provided for in the constitution. Consequently Gutti released Kipoi and all his co-accussed on bail and directed them to report to the registrar every first Thursday of the month.

Obviously, Kipoi’s release was sanctioned by the court’s ‘convening authority’ who is Museveni. As a norm, some powerful brokers must have negotiated for his freedom. Such brokers must be highly connected politicians from Busigu subregion; if not Lydia Wanyoto then it must be Simon Mulongo or some other big fish. Museveni must have communicated his directive through the so-called ‘investigating officers’ which is CMI. The figurehead Chairman of the Court Martial and the Prosecutor were only being theatrical. However, the deal must have involved some strong concessions on the part of Kipoi. Soon we may see him revealing how he ‘had been aided by Rwanda in his armed rebellion.”

Regulations 22 and 23 of the UPDF (Rules of Procedure) Regulations S.1. 307-1, it was submitted that those provisions are unconstitutional and contravene Article 128 (1) and (2) of the Constitution which guarantees the independence of the judiciary.

At the height of the northern Uganda insurgency, in 2000 the Museveni regime initiated an amnesty law that came to be known as the Amnesty Act 2000. The Act established an Amnesty Commissin headed by a High Court Judge. It aimed at granting immunity from punishment for all those who were involved in warlike activities against his regime if they abandoned and renounced rebellion. It covered all those who were involved in rebellion from 26th Jan 1986 when the Museveni regime came to power.

S.3 (I) of the same Act covers not only those involved in actual combat but also those collaborating with combatants by aiding and abetting. S.3 (II) exonerates all those involved (both combatants and their civilian collaborators) from punishment in form of criminal proceedings. Though it was meant to be a tool for encouraging defections from the LRA, other armed groups like ADF, PRA were later to benefit from the same. Prior to this law, some insurgents would either surrender or be captured while civilian collaborators would be arrested by security operatives but their fate would be determined by the goodwill of Museveni who would either pardon or just let them to rot in prolonged detention without trial.

Though the Act does not mention the involvement of security services in the amnesty process, behind the curtains it is the intelligence services that have been determining who benefits from amnesty or not. While defections from the LRA were mainly of lower cadres who had been victims of kidnap and possessed no vital intelligence information, the challenge came about when it came to ADF, PRA and LRA top commanders. The regime has been using the amnesty law to silence any efforts to seek compensation accruing from prolonged detentions without trial. Political detainees are always told to apply for amnesty if they are to regain their freedom hence no suing for damages. Such conditional amnesty is often construed by security services as a way of obtaining confessions yet the Act does not mention that as a requirement. For the innocent potential applicants who intend to use the amnesty only as a way of regaining their freedom find themselves in an awkward position.

Around 2002 the army forcefully removed treason suspects from Gulu Prison and detained them in a military barracks. In the process, one of the detainees was shot dead by the army before moving them to different places of detention while pressurizing them into applying for amnesty. The army’s Division Commander Brig. Otema told some of them point blank thus: “You will stay in jail as long as Museveni is still in power unless you apply for amnesty.” The entire group had to apply for amnesty in order to regain their freedom. Around the same time the regime ratified the Rome statute and referred five of the top LRA commanders to the ICC and they were indicted by the same court in 2005.

In 2006 as Museveni was disparately looking for a way of victimising his main political rival Dr. Besigye, Police chief Kayihura and then Minister Hope Mwesigye coordinated efforts to have some of the PRA suspects then detained in Makindye Barracks apply for amnesty on condition that they were to implicate Dr. Besigye over treasonous allegations. The applicants tricked them by accepting but when they were granted amnesty and forced to implicate Dr Besigye before the assembled press, they refused and they were detained in a safe house until Parliament had to intervene. Among all the PRA group its only Capt Amon Byarugaba who stood his ground and refused to apply for amnesty and he continued to be detained without trial in Makindye barracks.

In 2008 another LRA top commander Thomas Kwoyelo was captured and he immediately applied for amnesty under the Amnesty Act. In 2011 he was indicted before the war crimes division of the High Court but he appealed against his trial to the Supreme Court. The Principal State Attorney Patricia Mutesi submitted that the Amnesty Act promotes rebellion and urged the Supreme Court to declare it unconstitutional. However, in 2012 the Supreme Court ruled that Thomas Kwoyelo qualified for and should be granted amnesty and released from prison. The regime defied that order of the highest court in the land and Kwoyelo continues to relinguish in detention without trial. In 2012 as another top LRA commander Achellam was surrendering, the regime moved to amend the Act by striking out Part II that afforded blanket amnesty. It argued that amnesty was to be availed only to lower and middle cadres who denounced rebellion and not top leaders. Owing to pressure from religious, traditional and local leaders from northern Uganda, the blanket amnesty provision was reinstated in 2013.

Therefore, Museveni’s amnesty is a political tool that only targeted LRA lower cadre defectors but only to be overtaken by events. At its inception, he had not envisaged a situation where other more organised individuals and groups would come up. Granting or denial of amnesty has always been managed by Museveni through his intelligence agencies and the Amnesty Commission is just a figurehead that only issues certificates and resettlement packages upon instructions by Museveni.

Therefore, the surprisingly hasty release on bail of Kipoi and group midway the usual mock trial (three prosecution witnesses already testified) is a bait for the accused to make some strong concessions which we are yet to see. On the other hand, in some cases where the regime has failed to get sufficient evidence and for fear of embarrassment, it coerces detainees into applying for amnesty. In the later scenario, it was too early for Kipoi to be freed. 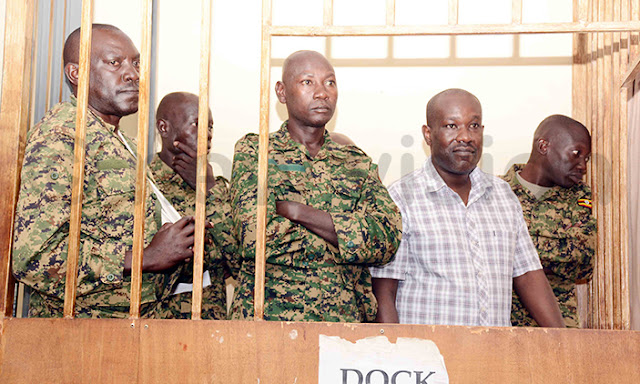 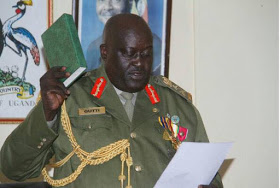 UGANDA: MUSEVENI’S 2021 RIGGING WILL FOCUS ON SECURING A MODERATE OPPOSITION

UGANDA: MUSEVENI’S 2021 RIGGING WILL FOCUS ON SECURING A MODERATE OPPOSITION