Uganda is a Militarised State. No funders, investors or donors would support a military coup in Uganda unless it is lead by a General. Muntu has an impressive CV. He is the longest serving CDF since our independence in 1962.

Muntu is well respected by all the security organs in Uganda. His IQ, EQ, AQ are so high that it also shocks me.

He is extremely disciplined. Some few try to take him down but never win. Muntu hardly ever talks. He seeks no pressers and misguided praises.

I think that the next president for our country must have a military background. We will transition like Algeria, Sudan and Mali. We need to work with the security organs.

I watched a clip of 28 seconds by Muntu reprimanding our police. I include it.

Below is a link to what my team wrote about Muntu years ago.

You will also find the Wiki entry about him. Although, my team knows more about Muntu than Wikipedia.

** USA, UK, EU, Russia, Israel, China, North Korea and all other funders could also support Gen, Salim Saleh or Gen. Tumukunda taking over. However, the Magnistisky sanctions which were slapped onto Gen. Edward Kalekyekizi (Kale Kayuhura) also more or less apply to Saleh and Tumukunde. Muntu left UPDF and government clean. Rtd. Col. Dr. Kizza Besigye could be supported but his FDC is on record for attacking all other opposition in Uganda. Just my take….MLN 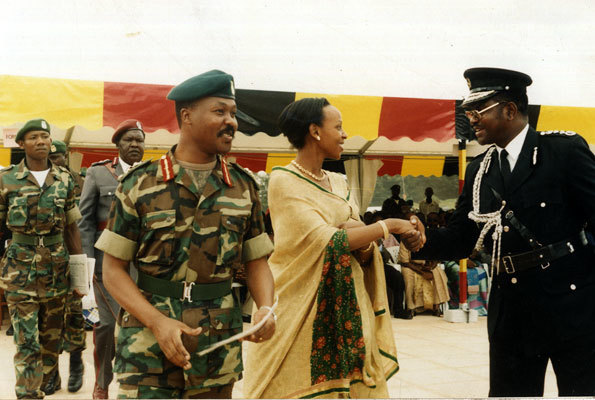 ** The following post has minor errors. Our editor had quit and I was posting without editing.

Because of the democratic has overtime been exemplified by Uganda’s leading opposition party – the FDC, its recent endeavor to pick its flag bearer for the forthcoming 2016 general election earned it a lot of credit.  Other than credibility, the exercise attracted a lot of national and international attention because it was a kind of referendum on whether Nuseveni’s military dictatorship should continue to hold Ugandans hostage or they should free themselves.

The two contestants in the race I.e Col (Rtd) Dr. Kiiza Besigye and General (Rtd) Mugisha Muntu represented different schools of thought.  The former believes Museveni’s military dictatorship is so entrenched that it can not be dislodged through a sham electoral exercise. He strongly contends that unless the meaningful electoral reforms are put in place, its a waste of time and meaningless to participate in it.  Following his participation in the past sham electoral exercises, sometime back he had publicly declared that he would never take part in any other electoral process that is organised by the same military dictatorship. However, recently he made a comeback by seeking to vie for the FDC flagbeareship – a move that his opponents attempted to exploit by branding him as being unprincipled.  To justify his comeback, he made it unequivocally clear that he was in the race purposely to push for electoral reforms ahead of the 2016 general elections as earlier presented to the regime under the banner of Cutizens Compact.  Further, he argues that if electoral reforms are not put in place ahead of the 2016 general elections where Museveni will be both as a player and a referee, he intends to “stop the game by sitting in the pitch.”   This analogy implies that Dr. Besigye and those who believe in his school of thought intend to mobilize desperate Ugandans who are craving for change to reclaim their country through civil disobedience.

On the other hand, the Gen. Muntu school of thought argues that with strong organisation, even without political reforms the regime can be defeated in an election. They further argued that they had built sufficient structures to steer the party to victory and was opposed to the Dr. Besigye line of thought.  Its not that Gen. Muntu does not know that its impossible to dislodge the Museveni military dictatorship through an electoral process in its current form.  As Museveni’s former Army and Military Intelligence chief, he more knowledgeable than anybody else that the military dictatorship and its rigging machinery (Police and the security forces) are so fused that a mere ballot paper as Museveni earlier on put it, can not get him out of power. The fact is that compared to Dr. Besigye, at the moment Gen. Muntu does not appeal to leading such a mass action. However, he strongly believes it can work if well organised. This is what some sections of Ugandans misinterpreted by alleging that he was a Museveni Mole. He is a great leader but only at a wrong time and place. Therefore, it won’t be a surprise if sooner or later he fully tows the line of “No reforms, No elections”. This is what he alluded to during his conceeding speech when he stated that civil disobedience without proper organisation is bound to fail with dire consequences.

The regime is mindful of the existence of a fertile ground for change and Dr. Besigye’s resolve to lead that change. Its against this background that after assessing the massive strength of support for Dr. Besigye in the country side, they abandoned their earlier plan to block Dr. Besigye from carrying the FDC flag in the hope that he would not only be diverted by the TDA into abandoning the push for electoral reforms but he would also be able contain the threat posed by Amama Mbabazi’s candidacy.  We are yet to see the accuracy of the regime’s estimates. However, they are not taking chances as they are busy preparing for plan “B” (intimidation, violence and bribery).  The said plan has of recent been boosted by the hastily promotion and retirement of Gen. Henry Tumukunde so that he takes over command of the 2016 election intimidation, violence, and bribery without legal hindrances of being a serving military officer. Otherwise, Gen Henry Tumukende is still in active military service but only supposedly ‘retired’ in order to hoodwink Ugandans.

Therefore, the verdict by the FDC delagates conference was a determining factor for the future of Uganda.

===
https://ift.tt/34x6ca0
Gregory Mugisha Muntuyera, commonly referred to as Mugisha Muntu (born October 1958), is a Ugandan politician and retired military officer. He is the current President of the Alliance for National Transformation (ANT), a political party he founded in March 2019. He previously served as the President of the Forum for Democratic Change (FDC), an opposition political party, from 2012 to 2017. In September 2018, General Muntu parted ways with the FDC citing ideological differences with the new FDC leadership of Hon.Patrick Oboi Amuriat. On 27 September 2018 he announced in a televised press conference that he and some other leaders had begun what he called The New Formation which later became the ANT.
He served as the Commander of the Army, the highest position in the Ugandan military, from 1989 to 1998. When the National Resistance Army was renamed the Uganda People’s Defence Forces (UPDF), General Muntu became Commander of the UPDF.
In 2008, he unsuccessfully contested for the FDC’s presidency, against Kizza Besigye. He was elected as party president in 2012.
He is now the Party President of Alliance for National Transformation (ANT)
History
Mugisha Muntu was born in October 1958 at Kitunga village in present-day Ntungamo District, Ankole sub-region, Western Uganda, to Enock Ruzima Muntuyera and Aida Matama Muntuyera. He had an affluent childhood as his father was a strong government functionary and close friend of Ugandan leader Milton Obote. He attended Mbarara Junior School, Kitunga Primary School and Kitunga High School. (Kitunga High School was later renamed Muntuyera High School, in memory of his father, by Obote.) Muntu attended Makerere College School and subsequently went on to graduate in political science from Makerere University, where he was deputy president of the students union.
Military career
Muntu joined the guerrilla National Resistance Army of Yoweri Museveni the day he completed his university exams, to the chagrin of his family and President Obote, who considered him a son. Early into the rebellion he was shot in the chest but survived after receiving treatment in Kampala. Later he emerged as the head of Military Intelligence after the NRA victory in 1986. In military intelligence he had under his command personalities like Paul Kagame, who would later become the President of Rwanda.
Muntu underwent further military training in Russia before becoming a division commander in Northern Uganda. He rose to the rank of Major General within the UPDF. His rapid promotion did not to go unnoticed by other senior officers in the Ugandan military. He was later to serve as Commander of the UPDF. That post was later renamed Chief of Defence Forces of Uganda. As army chief, he oversaw the demobilization of many sections of the army. Observers have attributed Maj. Gen. Muntu’s quick ascension to the pinnacle of the NRA/UPDF to his reputation as an incorruptible and loyal officer to the President of Uganda. This loyalty was rewarded by the support of the President during Muntu’s many quarrels with sections of the army which accused him of trying to alienate them. Prominent among these were the so-called ‘uneducated’ officers, led by Major General James Kazini. Muntu was accused of creating a schism within the army by showing preferential treatment to educated officers while sidelining those he considered uneducated.
Political career
Muntu was a member of the constituent assembly (1994–1995) and parliamentarian. After disagreeing with Museveni’s approach to politics and the military, he was removed from the army command and appointed as a minister, a position he politely turned down.[1] In November 2001, he was selected by the members of the Ugandan Parliament to serve as one of the nine Ugandan representatives to the East African Legislative Assembly (EALA).[2]
Personal life
Since 1992, he has been married to Julia Kakonge Muntu. They are the parents of one son, born in 1993, and one daughter, born in 1996.[3]

« Lakers Beat Heat in Game 4 of the N.B.A. Finals (Previous News)
(Next News) Climate Change and Poor Planning Are Blamed for California Blackouts »