UGANDA: There’s logic in US sanctions against Kayihura – EU ambassador 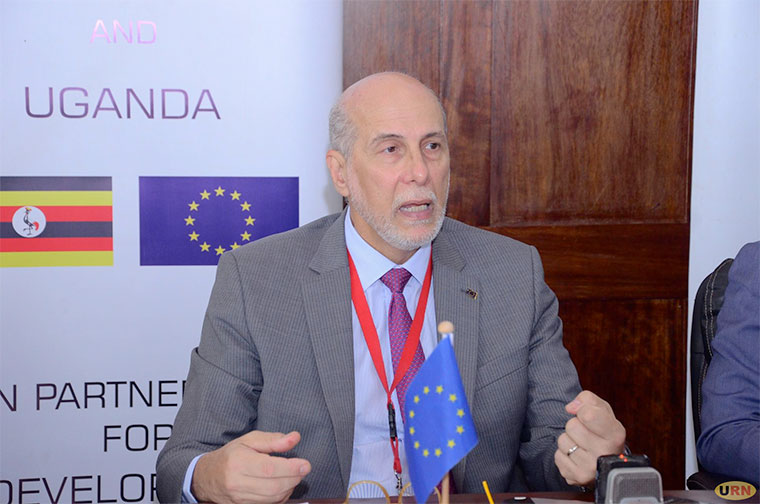 Written by URN for THE OBSERVER

There is logic and principle in the visa and economic sanctions imposed against former Uganda Police Force boss Gen Kale Kayihura, the head of the European Union Delegation to Uganda, ambassador Attilio Pacifici has said.

Last week, the US imposed visa restrictions and economic sanctions to Kayihura and his family over alleged corruption and human rights abuses. Kayihura in a long missive denied the accusations, saying he did most of his work with the US authorities – implying that if he’s guilty, then the US is equally guilty.

Now, the EU ambassador says even the European Union would have equally acted the same if they had the evidence at the disposal of the US. The US Department of the Treasury’s Office of Foreign Assets Control said that it has credible information that Kayihura was involved in torture, cruel, inhuman, or degrading treatment or punishment, through command responsibility of the Flying Squad, a specialized unit of the Uganda Police Force that reported directly to him.

The Flying Squad Unit members reportedly used sticks and rifle butts to abuse detainees at the infamous Nalufenya detention facility in Jinja. Detainees also reported that after being subjected to the abuse, they were offered significant sums of money if they confessed to their involvement in crime.

In addition, Kayihura allegedly engaged in numerous acts of corruption including using bribery to strengthen his political position within the government of Uganda, stealing funds intended for official Ugandan government business, and using another government employee to smuggle illicit goods, including drugs, gold, and wildlife, out of Uganda.

Ambassador Pacifici says that even Uganda had itself slapped charges against Kayihura, which gives credence to the US sanctions.

“These sanctions to the former IGP – I’m an observer on these issues as much as you’re. These sanctions are being imposed by the US [but] I can see the logic and principle of it. If I see that my friend here has done something wrong, I don’t want him in my country, I don’t.” he said.

“So I will tell Kale; you’re not welcome to my country because I know you have done something I don’t like because it is not in line with my values and my friendship. But this is what the Americans are saying. Who am I to say no. If the EU had had all kind of evidence and elements that have informed the decision, of course, the EU might have well have come to the same conclusion.” Pacifici.

Kayihura, 62, was sacked by President Yoweri Museveni in March 2018 and arrested in June the same year. He was slapped with three counts including failure to protect war materials and aiding the kidnapping and illegal repatriation of Rwandan nationals. He pleaded not guilty to the charge and was released on bail.

While the US designated Kayihura and his immediate family members, he says he has never owned any property in the United States, or anywhere else outside Uganda.

“I don’t have any bank accounts outside my country, Uganda. The insinuations in the statement that I could own any property outside Uganda are totally fabricated and malicious. The freezing of my so-called assets, therefore, is comical,” Kayihura indicated in a statement released on Saturday.

Kayihura accuses the US authorities of being hypocrites for their acclaim to uphold human rights yet in their letter and action, didn’t give him a fair hearing.

“How can they accuse, judge and condemn a person without the basic decency to respect the principles of natural justice, specifically, affording a person the opportunity and the right to be heard?” Gen Kayihura wonders.

He contends that the said allegations and the ‘ridiculous action’ is an attack on the sovereignty of Uganda since he and the Uganda Police Force are targeted in an official capacity.

“To sit in Washington and make the spurious and unproven baseless allegations, and take action on them without any effort to establish any truth, against a former IGP and a National Police Force is the highest form of disrespect of a foreign country,” Kayihura stated.